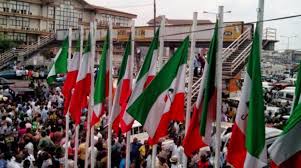 (AFRICAN EXAMINER) – An uproar arises  in Abakaliki capital of Ebonyi state between the police and Peoples Democratic Party ( PDP) at the party secretariat .This resulted in an attempt by the Fred Udogu led faction to take over the secretariat which has been under lock and key for a while following the fractionization of the party

The National Executive of the PDP had in November last year, after the governor’s defection, dissolved the state Executives of the party including the State Working Committee led by Onyekachi Nwebonyi.

The party also set up a Caretaker Committee led by Fred Udogu to oversee the party in the state in the interim.

But Mr. Nwebonyi and other members of the dissolved SWC challenged their dissolution at the State High Court.

The matter had suffered several adjournments even as three Judges have recused themselves from the matter.

The Fred Udogu faction last two weeks instituted another case at an Abuja High Court on the same matter.

The faction also reportedly secured an injunction barring the Nwebonyi committee from parading themselves as the authentic leadership of the party in the state.

Armed with the alleged injunction, the Udogu faction moved to take over the secretariat Monday.

Its members in their hundreds besieged the Secretariat around 10am but Security Agencies arrived and dispersed them.

When our reporter visited the scene, it was chaotic as the security agencies with an Armoured Personal Carrier were seen firing shots into the air which led to the PDP members running away in different directions.

It was gathered that the security agencies arrested some of the members including the Youth Leader of the Udogu faction, Obinna Iteshi.

Publicity Secretary of the Udogu faction, Silas Ọnụ lamented the arrest of the Youth Leader and other members.

He said: “Today, we are deeply saddened to report that the lives of Ebonyi people are no longer valuable to those mandated to protect them.

“Upon a valid Court order which restrained Nwebonyi and his urchins from parading themselves as leaders or even members of the People’s Democratic Party, we duly notified the police of our intention to access our Secretariat today”.

“Upon arrival, the police were obviously ordered to frustrate that effort and they swung into action. Firstly, the Deputy Commissioner in Charge of Operations asked that we go and obtained a “Enforcement Order” as if the case is one requiring further order (s) to give validity to the initial order – this is laughable!,” he said

The spokesperson further said that the Police started arresting their members on a spurious claim that the Secretariat which was previously vandalised is now being vandalised Monday.