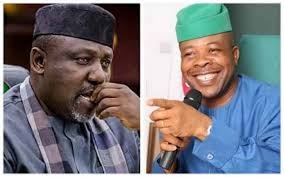 (AFRICAN EXAMINER) – Gov. Emeka Ihedioha of Imo has renamed Jacob Zuma Road in Owerri after First Republic parliamentarian and minister, Chief Mbazuluike Amaechi in a move that appears as an attack on the legacies of his predecessor, Rochas Okorocha.

A statement issued in Owerri by Mr Chibuike Onyeukwu, the Chief Press Secretary to the governor, stated that Ihedioha announced the re-christening at an occasion to mark Amaechi’s 90th birthday in Owerri.

Recall that the naming of the dual carriage way after the former South African president by former Gov. Rochas Okorocha attracted public condemnation against his administration.

“Dr Amaechi is an icon, one of the founding fathers of the nation, whose contributions to nationhood should not be overlooked.

“Amaechi remains an inspiration, who stood and defended those principles that remain valuable to nation building,” Ihedioha stated

African examiner reports that since Governor Ihedioha took office he has been touching on the legacies of his predecessor such as pulling down the statue of Jacob Zuma, scrapping of universities and polytechnics he (Okorocha) among other things.

Even Okorocha himself recently raised an alarm in a statement issued by one of his aides which partly states that:

“All the facilities Okorocha used to beautify Owerri, the State Capital, have all been removed…It is also worth mentioning that since his inauguration as governor he has not been able to do any other thing apart from inspecting, removing, destroying and discrediting all that Okorocha did.”