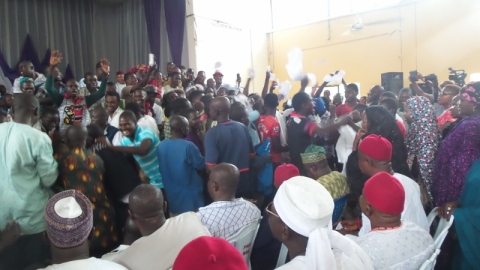 The leadership of the All Progressives Congress (APC) in Rivers State has moved swiftly to foil the plan of the Peoples Democratic Party (PDP) to impose an unpopular candidate on the State – a development which APC says must not be allowed to happen as it would spell doom for the State. 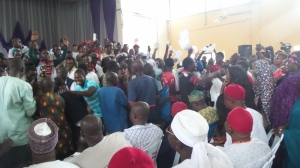 In this regard, on November 4, the Rivers APC Contact Committee led by Hon. Dakuku Peterside met with the leadership of the Non Indigenes Political Forum (NIPF) to strategise on how to vanquish PDP during the 2015 polls.

The meeting, which took place in Port Harcourt, the State capital, was the highlight of a sensitisation tour involving three other Committees earlier set up by Rivers APC in her strategic move to ensure that the party wins the 2015 polls convincingly.

According to Alhaji Ali Kwande who spoke on behalf of the decampees, “We are leaving PDP after observing that the party does not mean well for Rivers State with its attraction to violence that will not augur well for us to carry out our business activities peacefully besides we are all Rivers State indigenes having lived in Rivers State all our lives considering that no other Governor that have governed Rivers State have accepted us the way Governor Amaechi has done we have no other home than where ever he stays. This is why we are joining APC in mass.”

The decampees were warmly welcomed by the Chairman Contact Committee, Hon. Dr. Peterside, who represents Andoni/Opobo-Nkoro Federal Constituency in the House of Representatives and serves as the Chairman, House Committee on Petroleum Resources (Downstream). He commended them for taking the bold step, assuring them that they did not join the party late as they are now joint owners/founders of APC in Rivers State. “I encourage each one of you to move a step further by obtaining your APC membership card and the Permanent Voters Card (PVC) as that is the only means through which we can collectively save our State from the evil plots of PDP to take the State back to its dark years of insecurity,” Hon. Dr. Peterside said.

He explained that the mission of APC in Rivers State is not only to ensure good governance and erase corruption but also to ensure that the populist programmes of Governor Chibuike Amaechi are sustained.

Hon. Dr. Peterside told the NIPF members: “To show his seriousness towards the non indigenes in Rivers State, Governor Amaechi appointed one of you into the State Executive Council, Barr. Chuma Chinye, as the Commissioner of Commerce and Industry, Chief Ade Adeogun as Sole Administrator of the Waste Management Authority, with other sensitive offices offered to non indigenes.

Apart from all these, the Governor created the Non Indigenes Unit as the 24th Local Government Area of the State unprecedented in the annals of our nation to ensure that the benefits accruable to Rivers State indigenes are also accruable to non indigenes in Rivers State. With such a government that caters for each of you in this form, it is your duty to ensure that such a government is encouraged and motivated to do more by obtaining membership card and, most importantly, the Permanent Voters Card that INEC will start to issue in the State from 7th November, 2014.”

Responding, Chief Uchenna Okokoba, the indefatigable Cordinator of NIPF, assured of their readiness to fully mobilise their members and the entire Rivers State to support the mission of APC in the State. He declared that NIPF members have no other party to support except APC, saying: “Governor Amaechi has proven that he is a true brother to non indigenes in Rivers State that apart from appointing most of us into key offices, he has ensured that our children benefit from the free education and the free medical services in the State.” He assured Dakuku Peterside-led team of the unflinching support of members towards ensuring that APC Government forms the next government in Rivers State come 2015.

Hon. Chidiebere Okwu Worlu, Chairman of Mobilisation Committee, in his remarks pointed out that APC is a party set up by God to ensure justice, equity and fair-play in Rivers State polity. He said it is based on this that the party has decided to zone its gubernatorial position outside the Ikweree nationality as it will be criminal and injustice to other sections of the State for Governor Amaechi, who is from Ikwerre, to rule the State for eight years and for another Ikwerre son to rule for another eight years as being posited and canvassed by the PDP leadership in Rivers State and supported by the enemies of Rivers State operating from Abuja. “With this, any vote for PDP is a vote for injustice and support of evil against the State,” Hon. Okwawoh said. He concluded by admonishing all and sundry to join hands in order to demolish the evil machinations of PDP.

Other speakers all agreed that Rivers State does not have any future in PDP seeing what the State has suffered under the administration of President Goodluck Jonathan. Hon. Barr. Chuma Chinye, the Leader of the Non Indigenes in Rivers State, and Chief Ade Adeogun in their speeches assured the conveners of the meeting that NIPF members will do everything humanly possible to achieve the aim of APC in Rivers State.