Rangers Will Bounce Back to Top of NPFL, Says Ogunbote 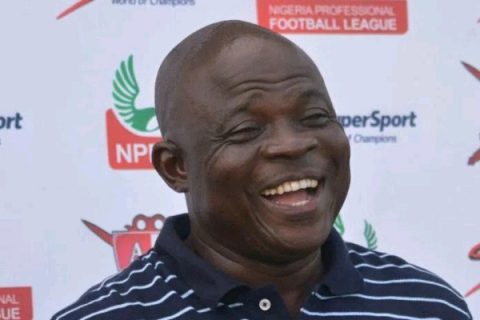 (AFRICAN EXAMINER) – Technical Adviser (TA) of Rangers International football Club of Enugu, Mr. Olugbenga Ogunbote, has solicited for more support and cooperation from stakeholders, including  sports journalists in his quest of taking the club to its rightful place in the Nigeria professional football league, NPFL.

The soccer tactician who equally asked for patience from the fans and all lovers of the Enugu club side, said that team was still a work in progress, assuring that he was committed towards  ensuring  that the Flying Antelopes succeeds in the ongoing  league season.

African Examiner Sports reports that Ogunbote, who joined Rangers from the  Aba, Abia state, club side, Enyimba International FC, took over the TA job of  the club after it posted a relatively poor performance during the 2016/2017 season.

Speaking during an interactive session  with members of the Enugu state chapter of Sports Writers Association of Nigeria, SWAN, at the Nnamdi Azikiwe stadium Enugu, Thursday, the Rangers Technical Adviser, expressed appreciation to all the major stakeholders of the club for their support to him and management, urging them not relent .

He said: “We have not gotten to where we want the club to be. I know expectations are high and we know that we will soon get to our destination where we will be singing ‘Holy Holy Holy’ at the end of the season.

“I do not like taking pressure from outside. That is why I always work towards success all the time. Some people are occupying our position and by the time we get there, we will never come down. I’ve managed traditional teams and I know expectations are always high.

On the issue slim margin with which the club win most of their home games, the coach said that, “rangers value three points more than goals in each match. Though we are working in each match to get a win, when the goals starts pouring in, we will appreciate it.

He further explained  that the reason why the club registered four grade A goal keepers was to ensure that it  doesn’t lack quality in that department in case of a national assignment.

Ogunbote, who was also a one time Chief Coach of Sunshine Stars of Akure, Ondo state, South West Nigeria, had called on the organisers of the league, to ensure live coverage of all NPFL matches, saying it would  ensure easy followership of clubs by their fans, adding that such gesture would equally  raise the standard of the  league.

Rangers, which won the 2015/2016 edition of the Nigerian league, presently  occupies the 8th position in the log  with 13 points having executed  eight matches,  and one outstanding.