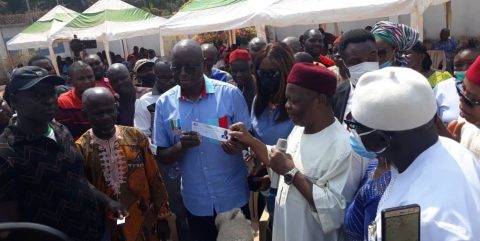 He said it is no longer news that civil servants in Nigeria are now free to join any political party of their choice, following a Supreme court verdict in January 2018 on the issue.

Zwingina stated this weekend shortly after Senator Ayogu Eze, revalidated his membership of the party, while his wife, Dr. (Mrs) Nkechi Eze, who is a serving civil servant, registered as a member.

The Enugu  registration/revalidation Committee Chairman, therefore, urged civil servants in the state to take a bold step and embrace the registration exercise, since the nation’s Apex court judgement has removed every obstacle on their way concerning belonging to a political party .

Speaking at the event, Senator Eze, who was the party’s gubernatorial Candidate in the 2019  general election in Enugu state, stated that the revalidation of his membership of the APC, and registration of his wife, before his people and teeming supporters has clearly demonstrated beyond any doubt, “where I belong.

According to him, “I am a strong and staunch member of APC, and that is why I have brought my wife who is a civil servant to also register as a member.

“APC is my party, our party. This is a party that means well for our people of Enugu state and South- East Geo political zone, so, am calling on our people and all  progressive minds to come out and embrace it enmass during this  era of  the ongoing registration/ revalidation exercise .

The former Chairman Senate Committee on information and media, as well as works, noted that without exaggeration, the APC led  federal government under president Muhammadu Buhari, has really done well for the South  East zone.

Senator Eze, listed the ongoing multi billion naira 2nd Niger bridge, the Enugu/ Onitsha, Enugu/ Port Harcourt roads, the state of the Art modern Akanu Ibiam International airport, among others as some of the  key infrastructural projects that are being executed by the APC led federal government in the zone.

The Ex-Federal lawmaker, said the party is aggressively putting political structures in place with a view to forming the next government in Enugu state come 2023, stressing that APC.

In a brief speech, Enugu state Caretaker Committee Chairman of the party, Dr. Ben Nwoye, who accompanied the Zwingina’s team to the area, also advised people of the locality to join the APC via the registration exercise.

He however, corroborated what Senator Eze and Zwingina said earlier,  assuring them that they won’t regret joining the ruling APC.