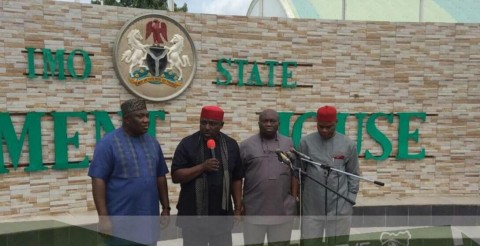 (AFRICAN EXAMINER) – Governors of South East geopolitical zone of Nigeria on Sunday resolved to  intervene in  the alarming epileptic power situation in the area which has continued to hinder economic growth in the region.

Rising from  their meeting  held at the Enugu government house, the governors said they have agreed to apply better strategies in providing adequate power supply that will ignite greater economic activities in the zone.

To this end, they  invited ex  minister for power and CEO of Geometrics power limited, Prof. Barth Nnaji,‎ to see how the zone could harness Geometrics power plant in Abia state, South East Nigeria  to boost power supply in the region

Briefing newsmen shortly at the end of the meeting which lasted some hours, chairman of the forum, and Governor of Ebonyi state, David Nweze Umahi,  disclosed that they will soon meet with the Enugu Electricity Distribution Company, EEDC, to ascertain its challenges and know how power distribution could be improved in the zone.

He also hinted  that they are consulting the Bank of Agriculture, BOA, for benefits derivable from the bank, noting that  the Bank  is not happy that the South East has  not been showing much interest in  harnessing funds  from the financial institution which is the anchor borrowers  of the Central ‎Bank of Nigeria, CBN.

Umahi equally hinted that the Governors have  put in place a 10 man economic team which comprised Prof. Barth Nnaji, former presidential economic adviser, Prof. Osita Ogbu and eight others that were selected two per each of the five states in the zone.

According to him, the South East Economic Integration agenda‎ is on course, noting that when it’s effort at improving power supply is achieved, it will help spur it’s railway, cement production and other economic and industrial programs the zone is articulating in unism.

The Governors the chairman  also disclosed, interfaced with the South East‎ Economic Corporation and the UK Department for International Development, DFID, for collaborations and corporations.

Umahi said the forum’s secretariat will soon be fully operational, as plans are in top gear for the recruitment of a Director Genera, a media consultant, among other needed staff.

present at the meeting were governor  Ifeanyi Ugwuanyi  of Enugu state, Willy Obiano of Anambra, Okezie Ikpeazu of Abia, while  Imo governor,  Owelle Rochas Okorocha  was represented by his Deputy, Eze Madumere.