South-West, South-South Emerge Champions of Zenith Bank/NFF U-13, U-15 Tournaments 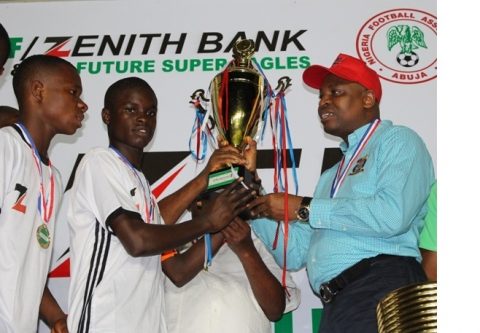 (AFRICAN EXAMINER) – The South West U-13 and the South-South U-15 football teams have emerged winners of the national finals of the Zenith Bank/NFF U-13, U-15 Future Eagles Tournament held in Uyo, Akwa Ibom State at the weekend.

The tournament, which was staged at the Godswill Akpabio International Stadium  and saw the best of youth football in the country on display, featured a total of 252 players who were drawn from the six geo-political zones in the country, with each zone presenting one team each for the U-13 and the U-15 categories.

Speaking on the tournament, the Group Managing Director/Chief Executive of Zenith Bank Plc, Mr. Ebenezer Onyeagwu, said that it was important for the participants at the competition to be at their best, as the career of every footballer starts at this stage when they learn the basics of the game. He expressed happiness at the abundance of talents being discovered through the tournament, adding that the bank will continue to partner the Nigerian Football Federation (NFF) to develop grassroots football in the country.

The Zenith Bank/NFF U-13, U-15 Future Eagles Championship is an initiative of the NFF in partnership with Zenith Bank to support developmental football in Nigeria and raise future stars for the various age-grade football competitions and the senior men’s football team, the Super Eagles.

At the 2019 U-17 African Cup of Nations held in Tanzania recently, eight players from the Zenith Bank/NFF Future Eagles project represented Nigeria at the competition.