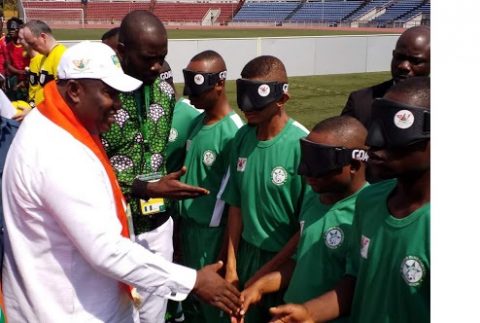 African Examiner Sports reports that the Championship, which was officially kicked off by Enugu state Governor, Ifeanyi Ugwuanyi, will serve as the African qualifier to the Tokyo, Japan 2020 Olympics, even as a total of eight countries are battling for the Africa’s sole ticket ahead of the global sports fiesta.

The African Championship which is taking place at the main bowl of the Nnamdi Azikiwe stadium Enugu, is being attended by Nigeria, Mali, Cameron, Libya, Morocco, Egypt, Nige-Republic Ivory Coast.

Chikezie Nwadike opened scoring for the Nigerian team in the 60th minute, while Azubike Oba made it 2-0 in the 87th minute into the second half

Atangana Guillaume reduced the deficit for the Cameroonian team in the 93rd minute but their final effort could not fetch a point in the match.

However, impressed with the high  level of organization of the competition which is solely sponsored by an Enugu based non-governmental organization NGO, Bina Foundation, world chairman of  International Blind Sports Association (IBSA) Mr. Ulrich Pfisterer, had during a media briefing in Enugu expressed satisfaction with the growth of the game in Nigeria.

He hinted that Nigeria would be given more chance to showcase itself in the sports via availing it the opportunity to host a world female championship next year.

Pfisterer, applauded Bina Foundation, for its commitment in developing and promoting blind football in Nigeria, stressing that going by what he has seen on ground, the country has a huge potential for the sports, urging the NGO, to keep the flag flying.

Also speaking at the media briefing, Nigeria’s Supers Eagles Technical Adviser, Gernot  Rohr, equally commended Bina foundation for promoting the sports in the country, assuring them of the team’s support at all time.

He said: “I want to thank the founder of Bina foundation, Lady Ifeoma Atuegwu and the chairman of the organization, Sir Chris Atuegwu, for what they have been doing for blind football in Nigeria. Let me express the solidarity of the Super Eagles to you” Rohr stated

Lady Atuegwu, and husband, Sir, Atuegwu, had in their separate remarks, enumerated some of the the achievements of the organization in blind football since 2017, among which is the establishment of a well-equipped fully staffed and functional blind football training Academy in Enugu.

She added that this will be the first appearance of Nigeria blind football team known as Star Eagles in an international championship and qualifier for Olympic Games in Tokyo 2020,

Also present at the media briefing were president of Nigeria
para- Athletics Federation Hon. Amobi Chikwendu, representatives of the federal Ministry of youth and sports, among others.

Lady Atuegwu, a Pharmacist by profession, used the medium to appeal to governments at all levels and philanthropists to support the physically challenged in terms of sports to enable them participate in international competitions.