The National chairman of the Peoples Democratic Party, PDP, Alhaji Bamanga Tukur has said that the party is gearing up to retake Lagos state, and reclaim the south west region of the country from the All Progressive Congress (APC). 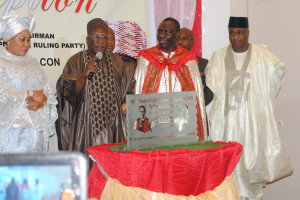 He also stated that the PDP and President Goodluck Jonathan will give their support for the upcoming PDP zonal congresses in the region to prepare them ahead of coming elections, especially the governorship election for Ekiti and Osun states next year.

Tukur spoke in Lagos at a reception dinner organized for him by the Foundation for World Peace (FWP) and the South West PDP to celebrate the recent award conferred on him by the Congressional Black Caucus of the United States as ‘African Man of the Year 2013’.

He also said, “Our party is united in the south west. I am particularly interested in the affairs of Lagos”.

According to him, the party will continue to put people from the south west region of the country in positions of power to reflect their contributions to the party and the country.

On the crisis bedeviling the party, Alhaji Tukur stated that it is a blessing in disguise, adding, that it will soon be a thing of the past, and that it has been blown out of proportion by the media.

“PDP is the most populous party that believes in dialogue. We dialogue and discuss, and in the process there can be misunderstanding, but they have always been resolved amicably”, he said.

While inviting aggrieved members of the party who had left to return, Tukur said that the “PDP is a big umbrella that can accommodate everybody”.

He however noted that is a party that believed in discipline, fairness, justice and equity, even as he stated that “almost all our members who left the party usually come back because it is the only party this popular that believes in dialogue”.

According to him, PDP is the only party that offers freedom of information, and believes in election, rather than selection, adding, “our job in PDP is peace and security, reconciliation without confrontation, reformation without revenge, and rebuilding our party based on equity and justice.

While speaking on the recent judgment of the Court of Appeal that set aside the decision of a Federal High Court that removed Prince Olagunsoye Oyinlola as the national chairman of the party, Tukur stated that he was yet to be served with the ruling.

According to him, the romance of some PDP governors with the opposition party is not an issue to the PDP, and described the leaders of the party as leaders not only in the country, but also in the West African region and continent

Also speaking at the event, Mr. Deli Doherty, PDP chairman, south-west stated that the award conferred on Tukur was in recognition of his performance as an outstanding African.

On his part, Founder of the FWP, Ambassador Samson Benjamin said that the reception in honour of Tukur was to appreciate him for the role he has played in developing Nigeria and the African continent.

According to him, Tukur is an illustrious father to be celebrated, even as he commended the CBC, for seeing it fit to honour a Nigerian with such an award which has only ever been conferred on former South African leader, Nelson Mandela.