Widow Narrates How Robbers Killed Her Husband, Threatened Her and 3-Month Old Baby 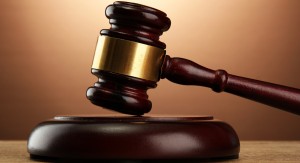 Led in evidence by Olakuleyin Oke, Senior State Counsel, on Tuesday, the wife of the deceased, Mrs Adijat Abubakar said the defendants entered her house through the front door and shot her husband, Abubakar  in the chest.

According to her, they came with materials they used in opening the door by force, adding that the robbers forgot a scissors-like aluminium material, one of the weapon in her house.

“It was around 2am, we heard a knock on the door after which the door was forced opened. They asked my husband to bring the money he brought home the previous day, his pocket was searched, they took N3,000 and his three phones was taken and he was thereafter  shot in the chest.

“They dragged him to the entrance of the sitting room and followed me to the bedroom, they pointed a gun at my three-month-old-baby and threatened me to confess where the money was.”

She further revealed that although there was no power supply, she was able to see their faces as a rechargeable lantern was on.

In her words, “am able to see their faces because our rechargeable lamp was on and they came with torches. When they were leaving, I followed them and overheard one of them calling ‘Bebo’, first defendant (Wasiu Arepo) as he was escaping through another route. They latter left on a motorcycle.

“Thereafter I shouted for help, neighbours had already woken up because of the sound of the gun shot. My husband died at the general hospital, so my neighbours brought his body back home.”

Adijat who is the prosecution’s first witness said that Baale (Traditional Ruler) heard when she shouted for help and called the police which led to the arrest of the defendants.

Under cross examination by the defence counsel, Mr L. Shopeyin, Adijat insisted that she did not know the defendants before that day.

She added that the community had a landlord association meeting the previous day and issues were raised on Iyalaje selling beer in the community. She stated that the robbers packed their get-away motorbike in front of Iyalaje’s beer parlour.

She further said that police recovered a locally made gun and the bike used for the operation. The defendants had earlier pleaded not guilty to the three count charge preferred against them by the State.

However, Justice Lawal-Akapo adjourned for further hearing in the mater.