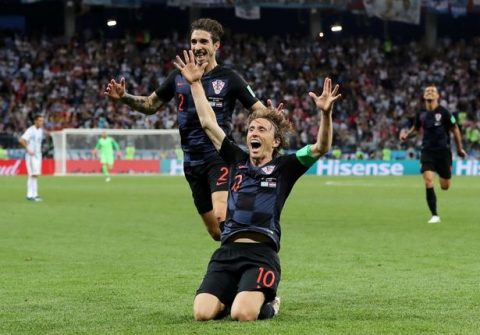 (AFRICAN EXAMINER) –  Without further ado, the 16 teams that have qualified to play in the second round of the ongoing World Cup are set once again to do battle with each other for the quarter-finals slots.

The News Agency of Nigeria (NAN) reports that 16 teams qualified for the knockout stage of the FIFA World Cup to jostle for the eight quarter-finals slots.

While the other 16 teams, including the Super Eagles that did not qualify for the round of 16 have since departed Russia to their countries.

Now that the World Cup is now in the knockout stage, the issue of projections would have no bearing on the match pairings because each of the teams would have to decide their destinies through outright victory.

With the benefit of hindsight it is assumed that the coaches of the 16 gladiators would have worked on their perceived weaknesses before the commencement of hostilities to decide the quarter finalists.

The Lionel Messi inspired La Albiceleste that barely escaped elimination from the hands of the Super Eagles of Nigeria, would surely want to make amends by defeating Les Bleus of France for the quarter-finals ticket.

But France under the tutelage of 1998 World Cup winning captain, Didier Deschamps, also have their sights fixed on the quarter-finals slot which the Jorge Sampaoli coached Argentina are also eyeing.

Argentina have one of the most fearsome attacks in the world but so far, Sampaoli has not been able to get the players to click, maybe this crucial showdown will bring out the best from Sergio Agüero, Paulo Dybala, Gonzalo Higuaín and Ángel Di María.

Deschamps has one of the most talented squads at the World Cup, but they were underwhelming at the group stage and seem to lack consistency…maybe the France showdown may provide the spark needed to propel their campaign.

Players like Antoine Griezman, Kylian Mbappe, Thomas Lemar, Paul Pogba, Olivier Giroud would need to step up their game, for a likely encore of their 1998 triumph at the Parc de Prince.

The mouthwatering showdown between Portugal and Uruguay at the 48, 000 capacity Fisht Olympic Stadium, Sochi, is one match that could swing either way because of the pedigree of the players in the two teams.

It now behooves on Coach Fernando Santos of Portugal and Oscar Washington-Tabarez, to roll out their troops armed with the requisite tactical stratagem to outwit their opponents in the one-off match to decide the quarter-finalist.

This is where we expect to see the likes of Cristiano Ronaldo, Ricardo Quaresma, Pepe, William Carvalho…coming up with their A-game against the likes of Luis Suarez, Edison Cavani, Diego Godin.

The obvious strength of Uruguay lies up front with Luis Suárez and Edinson Cavani forming one of the tournament’s most potent partnerships; Uruguay have yet to concede a goal in this World Cup.

While Ronaldo is still the focal point, the likes of Bernardo Silva, André Silva and Gelson Martins have gained more experience and are able to support him better up front.

The two teams have met twice before, the last time in 1972, with one win for Portugal and a draw.

Without any iota of a doubt, Russia’s fairy tale campaign in the Coupe de Mundial will surely shudder to a halt, as they pit their wits against the 2010 World Champions, Spain, at the Luzhniki Stadium.

It will be recalled that Spain’s preparations were thrown into disarray two days before their first game against Portugal when the FA sacked the coach, Julen Lopetegui.

This was after he had agreed a deal to take over at Real Madrid after the World Cup without informing them. The stand in Coach Fernando Hierro has since steadied the ship and La Furia Roja look poised for a quarter final berth.

As hosts, Russia will have the majority of the crowd behind them, but even they will recognise this as Russia’s toughest fixture so far, and a win will be little short of a miracle

Russia can be rightly described as one of the “boys’’ that managed to sneak into the round of 16 alongside the super powers of world football, after their opportunistic victories against a hapless Saudi Arabia and Egypt….their 3-0 loss against Uruguay actually exposed their underbelly.

Russia and Spain played in a 3-3 draw in November 2017, but the 2010 World Cup Champions have the better over Russia in tournament football, beating them 4-1 and 3-0 in the 2008 European Championship.

The quarter-final ticket at stake between Croatia and Denmark at the Nizhny Novgorod Stadium, is one which the bookmakers have already tipped the France 1998 World Cup bronze team to pick — on current form — any team with Luka Modric and Ivan Rakitic in midfield are going to have a lot of possession and create chances.

Coach Zlatko Dalic will surely play to his team’s strength and strive for the quarter-finals slot, to emulate and possibly surpass the 1998 bronze winning squad.

Åge Hareide has taken over from Morten Olsen and plays a more direct football than his predecessor, while setting up the team to get the best out of Christian Eriksen. Read a tactical analysis here.

Denmark would have to bank on the dexterity of Christian Eriksen one of the best playmakers in Europe alongside Pione Sisto and defensive midfielder, William Kvist to stem the onslaught of the rampaging Croats.

Brazil versus Mexico will be another captivating showdown between the hosts of the 1970 World Cup and the winners of that edition of the FIFA quadrennial flagship tournament.

Since after the humiliating 7-1 defeat against Germany four years ago. Coach Tite has made the Selecao into one of the favourites to win the tournament.

The attack is formidable with Neymar back after injury and backed up by players such as Philippe Coutinho, Willian, Gabriel Jesus and, the mercurial left-back Marcelo.

El Tri of Mexico also fancy their chances of picking the quarter-finals ticket, but their 3-0 loss to Sweden in their last group match has certainly put their vaulting ambition in great doubt.

The attack for Mexico looks potent with Javier Hernández the obvious focal point, but Hirving Lozano may well prove to be an even bigger threat for the Juan Carlos Osorio-tutored team.

Osorio has not yet found his ideal No 6, with Héctor Herrera often leaving too much space between defence and midfield, which the opposition can exploit to devastating effect.

The Red Devils of Belgium are also poised to take down the Blue Samurais of Japan in what may look like a one sided encounter, but the Japanese under the astute tutelage of Akira Nishino may have a trick or two under their sleeve.

Shinji Kagawa et al must have to be at their best to undermine the Roberto Martinez’s high flying Belgium with the full complement of Belgian football parading the likes of Kevin de Bruyne, Eden Hazard, Romelu Lukaku…..except by a stroke of misfortune Belgium should carry the day.

England versus Colombia will feature two teams that will surely go for broke in the showdown for the quarter-finals ticke the last time — England played in the quarter-finals was 20 years ago in France but got halted by La Albiceleste of Argentina in a penalty shootout.

Colombia played in the quarter-finals of Brazil 2014 and the Radamel Falcao captained squad under the brilliant tutelage of Jose Peckerman, look to reenact their 2014 feat at the expense of England, but Gareth Southgate and his young and talented squad feel they can do great things in this World Cup.

Southgate sees the encounter as England’s biggest challenge for a decade and said:“What we have to do is to prepare for a thrilling knockout game. Our objective was to qualify from the group and we have done that.

“We are still work in progress and that’s not a bad thing at this stage,’’ he said.

Switzerland versus Sweden will feature two highly tactically disciplined sides that play with precision and passion to get the much needed result from a seemingly impossible position, in their respective matches against Serbia and Mexico.

Not much has changed from the Switzerland team that contested Euro 2016, but it seems to be a bit more compact in this World Cup, their coach, Vladimir Petkovic, says the team have grown together and keep working hard for each other.

Goals can sometimes be hard to come by and Haris Seferovic, who is likely to start up front will be relied on to deliver the goods.

Janne Andersson’s team are featuring in their first major tournament Sweden have contested without Zlatan Ibrahimovic since 2000 in which focus is placed on the team and not an individual.

They are extremely organised under Andersson, who prefers a straightforward 4-4-2, Emil Forsberg offers in spite of his inconsistencies will be relied on deliver the goods in a starring role Marcus Berg Ola.

On the whole, the Round of 16 will provide fans with direct and purposeful football in which the teams are supposed to go for each other’s jugular because the competition has gone beyond the points stage — at stake is a quarter-finals ticket and may the better teams win. (NAN)