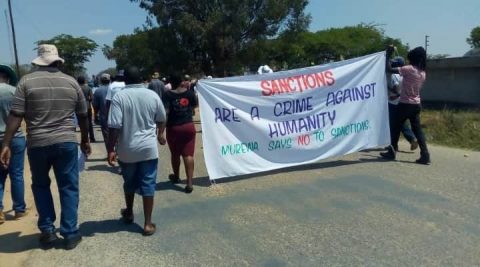 Zimbabwe has been under sanctions for the past two decades following an embargo that was imposed after the country implemented the land reform starting in 2000.

The country is divided with the ruling Zanu-PF party claiming sanctions are hurting the economy and ordinary citizens while opposition parties and civic society claim the sanctions are targeted at individuals aligned to Zanu-PF because of their abuse of power, human rights and corruption.

The demonstrations come after SADC at its 39th summit in Dar es Salaam last year, set on October 25 as a day of solidarity against sanctions in Zimbabwe with all member countries pledging to hold activities on the day until the embargo is lifted.

Zimbabwe marked the Anti-Sanctions Day with a virtual anti-sanctions musical gala hosted in Bulawayo on Saturday night and the whole drive is under the theme: “Resilience, solidarity and progress in a sanctions environment.”

Posting on his official twitter handle, President Mnangagwa said: “We are not alone in calling for the removal of sanctions. I would like to thank leaders across Africa and the world for supporting Zimbabwe in our campaign to remove sanctions and allow our country to achieve its full potential.”

China, Zimbabwe’s all-weather friend is one of the countries outside Africa that joined Zimbabwe in calling for removal of sanctions.

In a statement, SADC chair President Filipe Nyusi of Mozambique said sanctions imposed on Zimbabwe must be removed immediately as they are a violation of the UN Charter and against the spirit of multilateralism.

“We are encouraged that SADC call has received some attention and as such we applaud the recent call by the UN Secretary General Dr Antonio Guterres and the UN Human Rights Commission for the removal of unilateral coercive measures as they have significant negative impact on access to Covid-19 prevention measures and post recovery efforts.

“We are acutely aware that the continuation of sanctions not only impacts negatively on socio-economic progress in Zimbabwe but also on the attainment of the SADC Vision 2050, the African Union Agenda 2063 and ultimately and the 2030 United Nations Agenda for Sustainable Development.

As SADC we fully support the very constructive reengagement dialogue between the Republic of Zimbabwe and her global partners including those that have maintained sanctions on Zimbabwe. We call on all progressive forces to lend diplomatic political and moral support to the reengagement efforts,” said President Nyusi as he rallied the whole world to support lifting of sanctions.

Zimbabwe has claimed the sanctions undermine efforts to respond to socio-economic challenges.