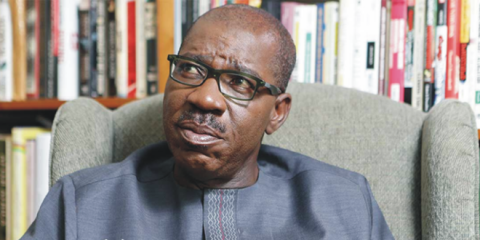 Against this background, Obaseki, while speaking to newsmen Wednesday after submitting his expression of interest and nomination forms at the APC National Secretariat, Abuja, cautioned that it was “wrong for any human to try to play God”.

In relation to this, the Governor who has been at loggerhead with the National Chairman of the APC, Comrade Adams Oshiomhole, urged his predecessor to recuse himself from the party’s governorship primaries in the South South State as he is an interested party.

Obaseki stressed: “It is against natural justice for a man to be a judge in his own case.”

The Governor boasted that he and his colleagues (Governors) have paid a visit to the APC National Leader, Asiwaju Ahmed Tinubu in Lagos, as part of efforts to strengthen the party and reassure him that they remained committed to building the party.

“For me and my colleague, (Governors), we can’t see the party we are building destroyed. We should all drop our egos and work for our party” Obaseki restated.

The Governor expressed hope that he would win the APC primaries irrespective of the mode adopted.

On allegation over cross carpeting to another party, Obaseki denied speculation that he had purchased the opposition Peoples Democratic Party (PDP) Governorship nomination forms.

The Independent National Electoral Commission (INEC) has scheduled Governorship polls for Edo and Ondo States for later this year.