Police Burst Workshop Where Stolen Vehicles Are Refurbished and Sold 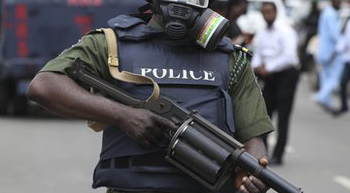 Acting on a tip- off, the police have uncovered a painter’s workshop in Abraka, Ethiope East council Area of Delta State where stolen vehicles are refurbished and sold.

Owner of the workshop, identified as Akposere Philip of 363 Agbor/Sapele Road, Abraka, has been arrested.

The Police Public Relations Officer (PPRO), Delta Command, Celestina Kalu, who disclosed this to newsmen, said the detectives, raided the workshop and recovered one Honda Accord S/Wagon with Reg. No. (EDO) BEN 994 RF.

According to Kalu, preliminary investigation had revealed that the said Honda Accord was snatched at gunpoint from its owner last month at Ikpoba Hill, Benin City, the Edo State capital.

She added that two other suspected stolen vehicles under refurbishment were also recovered from the workshop.

The PPRO, equally hinted that efforts were on to track down his cohorts.

Kalu however, warned hoodlums operating in the state to better quit the unholy act, or be ready to face the music if apprehended by law enforcement agents.