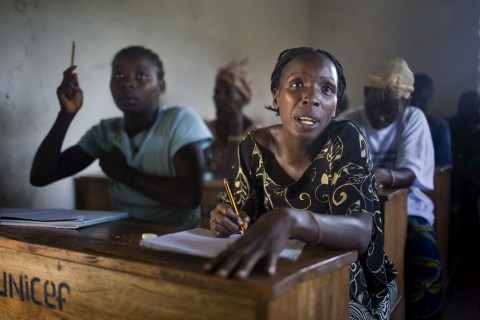 UNESCO views this as a serious gender imbalance in global education to have left over 100 million young women in low and lower middle income countries unable to read a single sentence, and will prevent half of the 31 million girls out of school from ever enrolling. 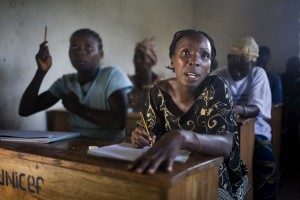 These are among the main findings of the Gender Summary, which analyses data from the latest edition of UNESCO Education for All Global Monitoring Report.

The new summary, launched for International Women’s Day in partnership with the United Nations Girls Education Initiative (UNGEI), calls for equity to be at the forefront of new global development goals after 2015 so that every child has an equal chance of learning through quality education.

Girls living in the Arab States are at a greater disadvantage: the share of females in the out-of-school population is 60 %, compared with 57% in South and West Asia and 54 % in sub-Saharan Africa.

On current trends, it is projected that only 70% of countries will have achieved parity in primary education by 2015, and 56% will have achieved parity in lower secondary education. Unless improvements are made, the poorest girls will achieve universal primary completion sixty years later than the richest boys.  The new summary reiterates the need for progress in education to be more evenly spread between girls and boys if global education goals are to be achieved.

“It is simply intolerable that girls are being left behind. For poor girls, education is one of the most powerful routes to a better future, helping them escape from a vicious cycle of poverty. Governments must ensure that there is equal access to education to address this shocking imbalance,” said Irina Bokova, Director General, UNESCO.

The EFA GMR 2013/4 Teaching and Learning: Achieving Quality for All shows that it is not enough for children just to enroll in school, they need to learn while there. Due to low quality education over the years, 175 million young people in low and lower middle income countries are unable to read a single sentence, of whom 61% are female.  In South and West Asia, two out of three young people who cannot read are young women.

The Gender Summary demonstrates the importance of investing in girls’ and women’s education, not just for the individual, but for the whole of society. If all women had a primary and secondary education, child marriages and child mortality could fall by 49 % and 64 % respectively. With just primary education for all women, maternal deaths could be reduced by two-thirds.  Educating women can help protect them from falling into poverty as well by helping them find work and reducing the gender wage gap.

“Poor, rural girls are far less likely to be taught by female teachers who can provide them with a role model for their future and help encourage them to stay in school. To address this, governments must consider providing safe housing or financial benefits to encourage more female teachers to work in remote areas. Alternatively, recruiting locally can help ensure teacher candidates reflect the diversity of the children they are teaching,” Pauline Rose of the EFA Global Monitoring Report said.

Girls also need more female teachers, often for cultural reasons, and to provide a role model to keep them from dropping out of school. However, in Sub-Saharan Africa, female teachers make upless than 40% of the total teaching workforce in all countries at the upper secondary level.

The GMR makes the following recommendations to get girls education back on track, which is that girls’ education must be at the forefront of new education goals after 2015 and that every girl should have an equal chance of going to school and learning while there as new goals need clear, measurable targets with indicators that will track the progress of the most disadvantaged and in particular girls.

It also recommends that the best teachers must reach the learners who need them most and that the “national education plans must include an explicit commitment to reaching out to girls and the marginalized. Female teachers in particular should be recruited locally. Incentives must be provided to ensure the best teachers work in remote, under-served areas.

“Teachers need gender sensitive teacher education: Teachers, both female and male, need training to understand and recognize their own attitudes, perceptions and expectations regarding gender. Curricula must be inclusive. Teachers can only break learning barriers effectively if they are supported by appropriate and inclusive curricula that pay particular attention to the needs of girls at risk of not learning.”