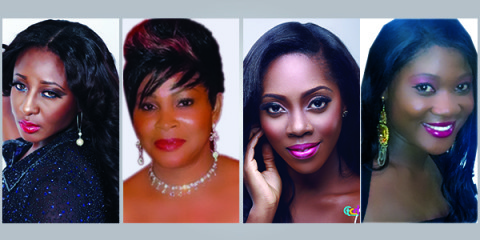 When, recently, singer-writer Etcetera wrote in his weekly Punch column, an article about how it has become a trend for female celebrities in Nigeria to marry a second hand husband (his term for a man that has either being married before or has children with another woman) he didn’t get much attention until singer Tiwa Savage and hubby Teebillz, sensing he had written the piece to sub them, replied.

Their reply sparked off controversy, with many chastising the couple for being too harsh on the singer when he did not expressly mention their names in his piece. However, if one looks critically at Etcetera’s analogy, the debate about whether or not he had the duo in mind would seem irrelevant compared to the truth contained in his piece.

His theory is not far-fetched, as there abound countless female celebrities who fall into this category. Notable amongst them are: Mercy Johnson, her bubby and their daughter, Purity.

MERCY JOHNSON: Her marriage to Odianosen Okojjie in August 2011 did not happen without a fight from Lovely, the former wife of Odi and mother to his two kids. She criticized the actress for breaking her home and advised that she sticks with a single guy and let her man be. The struggle went on for weeks but finally, Mercy got married.

NUELLA TCHIKERE: A similar fate befell young actress, Nuella when she made to marry movie director, Tchidi Chikere. Sophia, Chikere’s former wife didn’t fold her arms, instead she put up a fight that got the media’s attention. She criticized openly the union and accused the director of neglecting her and his kids since Nuella got into the picture.

FUNKE AKINDELE: Her 3-in-1 elaborate marriage to Almaroof Oloyede in May 2012 collapsed a year after, making it one of the industry’s shortest marriage. Although it was blamed on irreconcilable differences, many till date, opine that the marriage would have lasted longer, if her husband had been single or without a child from other women.

BUKKY WRIGHT: Her quiet marriage to Bolaji Basia in Canada became publicized after it got dissolved on a controversial note. Basia already had kids from his previous relationships. And Basia is only one out of at least three other previously married men Ms. Wright has ben involved with.

FOLUKE DARAMOLA: She got married to Kayode Salako in February, 2013 amidst many troubles, accusations and counter accusations. Salako had been married to a pastor with whom he had three children before divorcing her to marry Daramola.

STELLA DAMASUS: Her rumored marriage to Daniel Ademinokan, former husband to Doris Simeon, got her on this list. Daniel amidst controversies, divorced Simeon and got closer with Damasus in Abuja where the wedding allegedly took place.

ANNIE MACAULEY IDIBIA: With 2Face’s many escapades with women and the number of kids he has, Annie Macauley without a doubt fits into this category. Although one must be clear: the pair have moved on the establish themselves as one happy couple, with the days of escapades since over.

MERCY AIGBE: Before she married Lanre Gentry, with whom she now has a son, Lanre already had been married and gotten for himself three children. His marriage to Mercy didn’t hold until he had fully divorced his former wife.

LAIDE BAKARE: After divorcing her first husband, Olumide Okunfulire, actress, Laide Bakare got married to Mutairu Oriliowo who already has kids from his previous relationships.

NSE IKPE ETIM: She wedded her UK-based lover April 2013 in a very quiet ceremony but it didn’t take long before her fans got to know that her man, Clifford Sule already has a 13 year old son from some other woman.

INI EDO: Although her husband Philip Ehiagwina claimed to have divorced his wife, Ruth, two years before meeting Ini, there still was trouble before their eventual union. US based Ruth accused Philip of abandoning her after she helped him secure a stay in the US.

LOLA ALAO: Far away in Georgia, US, she got married to married man, IT guru, Wale Ajibola in a quiet wedding. She was even quoted to have said ‘If a married man will make you happy, go for it.