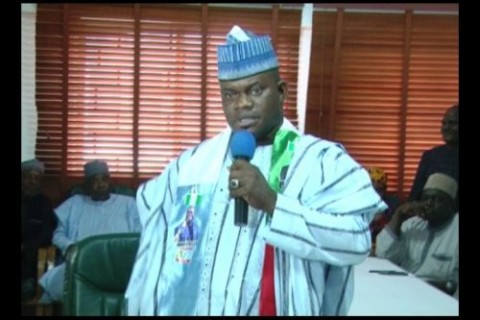 BALTIMORE, MD (AFRICAN EXAMINER) – The All Progressives Congress has formally picked Yahaya Bello as its guber candidate  to replace late Abubakar Audu who died recently at the verge of winning the Kogi state governorship election.

The party picked Mr. Bello because he came second to late Mr. Audu in the APC’s primary held August 13.

The deputy director of information of the Independent National Electoral Commission, Nick Dazang, confirmed on Monday that the APC has sent the name of Yahaya Bello as replacement for late Mr. Audu in the supplementary election scheduled for December 5.

“The party has sent the name of its replacement candidate, the second runner-up in their primaries, that is Yahaya Bello, to the commission,” Mr. Dazang said.

Meanwhile, our correspondent reports that Hon. James Faleke, who was the running mate to Mr. Audu, stormed out of Monday’s meeting of APC leaders at the party’s secretariat in Abuja, in protest of Bello’s candidature vowing to challenge the party’s decision in court.

Hon. James Faleke asked INEC to declare him the governor-elect  in the election in which the electoral umpire said was inconclusive.