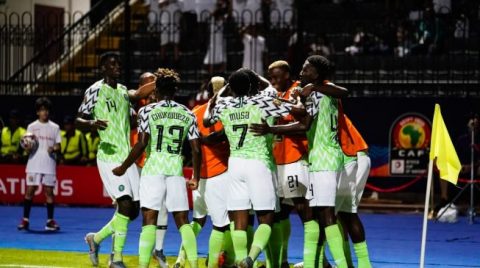 (AFRICAN EXAMINER) – Nigeria’s Super Eagles will on Saturday play Cameroon in the round of 16 matches of the ongoing Africa Cup of Nations in Egypt.

The fixture was accomplished on Tuesday evening after Cameroon’s 0-0 draw with Benin Republic and Ghana’s 2-0 defeat of Guinea Bissau.

The goalless draw condemned the cup holders to second place in Group F; and a direct confrontation with the second-placed team in Group B, being Nigeria.

Cameroon defeated Nigeria in the AFCON final in 1984, 1988 and 2000, but most painful for the Super Eagles was the agonising penalty shoot-out loss in front of home fans at the National Stadium, Lagos, on Feb. 13, 2000.

In 2004, Jay Jay Okocha spearheaded a 2-1 defeat of Cameroon, in a quarter final match at the Stade Mustapha Ben Jannet in Monastir, Tunisia.

In the 2018 FIFA World Cup African qualifying series, the Super Eagles lashed the Lions 4-0 in Uyo and were forced to a 1-1 draw in Yaounde.

Saturday’s game is a titanic battle, and the Super Eagles are expected to pick themselves up from Sunday’s stunning defeat by Madagascar in their last group match.