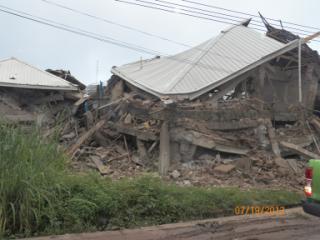 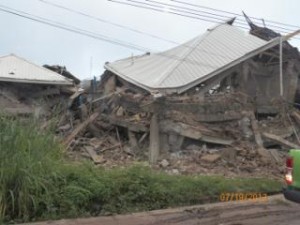 Tragedy has trucked in Enugu, south-east Nigeria as a 3 storey building with a pent house collapsed. The building, belonging to a South African based businessman caved in at about 6.40 am on Saturday.

African Examiner gathered that Work on the collapsed building situated at plot 16 Nnobi street, Uwani Enugu, was said to have been stopped since early last year for an undisclosed reason.

When our correspondent visited the scene of the disaster, bulldozers from Arab Contractors Construction Company and men of the state Fire Service were seen clearing the debris in search of casualties if any.

Reacting to the ugly development, the state commissioner for Lands, Mr. Emeka Ujam, told reporters at the site that government was fully aware that the building was not approved and had severally warned the owner and the builders to stop work.

He said, his ministry’s field men discovered that the building was defective and the foundation could not carry a 3-storey structure, hence “we promptly stopped work on the site”.

But the builders, according to him, clandestinely continued work and brought it up to the level that led to its collapse.

His word: “This has exonerated us because when we tell them to build according to government specifications, they will think we are out to victimize them,”

The commissioner said apart from revoking the land, government would arrest and prosecute all those involved in the continuation of the building by defying its orders.

The commissioner for Enugu Capital Development Authority, Ikechukwu Ugwuegede also told newsmen that the owner and builders did not conform with government specifications, “and now this the result.”

Ugwuegede said they exceeded the height for the foundation and announced that henceforth, government would tighten up the construction processes of buildings.

Ugwuegde, regretted that the collapse was the first to occur in Enugu for a very long time.

The commissioner, stressed that henceforth, buildings with up to two floors would now have construction project sign boards mounted at the site during construction.

“This is to allow the public and the authorities know the designers, engineers, contractors and others involved in the construction and hold them liable immediately in the event of this type of incidence.” He declared