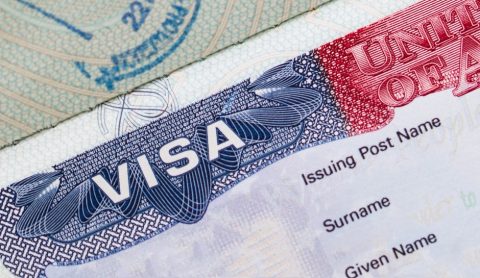 (AFRICAN EXAMINER) – Four serving governors are among a ten-man list of high level politically exposed persons that have been banned from obtaining United States visa.

The serving governors include a sharp-witted and cerebral governor from the Northwest who is known to be a close ally of President Muhammadu Buhari.

Another governor from the Northwest who was involved in an alleged act of impropriety that was videoed and circulated online is also banned alongside members of his family. His deputy governor and a commissioner who were involved in an altercation during the General Election with the police are also on the list

The Resident Electoral Officer in the State of the second Northwest governor who was involved in the alleged act of impropriety that was circulated on video is also on the list.

The fourth governor is from the Southwest who won his election against the odds after some incidents that included the deployment of security and the military. He is banned alongside his predecessor who is also a ministerial nominee who left office with the burden of delayed salaries to civil servants.

The returning officer who played a significant role in allegedly changing the tide of the election that brought the Southwest governor to office is also on the list of the US visa ban.

Two ministerial nominees, both ex-governors are also on the list. One of them from the South-South played a very visible role in the president’s re-election campaign. The other nominee was the predecessor of the Southwest governor who was banned and himself left office as governor with the burden of delayed payment of salaries to civil servants.

It was learnt that the two high level persons and their families banned is only the first in the series of actions being taken by the United States to show its abhorrence for the slide in the country’s democratic ethos.

The news of the visa ban was released by the United States Department of State on Tuesday in a statement issued by spokesperson Morgan Ortagus.

He said: “The United States is a steadfast supporter of Nigerian democracy.  We commend all those Nigerians who participated peacefully in the February and March 2019 elections and have worked to strengthen Nigerian democratic institutions and processes.  As Nigeria marks the twentieth anniversary of a return to democratic rule this year, we remain committed to working together to continue to advance democracy and respect for human rights and achieve greater peace and prosperity for both our nations.  We condemn those whose acts of violence, intimidation, or corruption harmed Nigerians or undermined the democratic process.

“In a January 24 statement, the U.S. government said that we would consider consequences – including visa restrictions – for individuals responsible for undermining the Nigerian democratic process or for organizing election-related violence.  To that end, the Secretary of State is imposing visa restrictions on Nigerians believed to be responsible for, or complicit in, undermining democracy in Nigeria.  These individuals have operated with impunity at the expense of the Nigerian people and undermined democratic principles and human rights.

“The Department of State emphasizes that the actions announced today are specific to certain individuals and not directed at the Nigerian people or the newly elected government. This decision reflects the Department of State’s commitment to working with the Nigerian government to realize its expressed commitment to end corruption and strengthen democracy, accountability, and respect for human rights.”