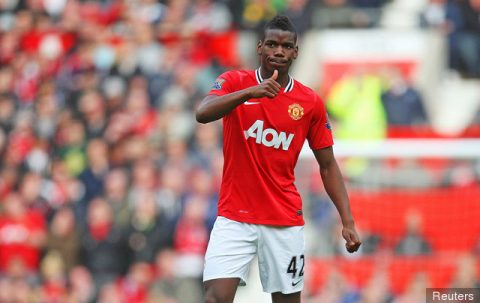 The France midfielder came ahead of his 89 million pounds transfer from Juventus.

Pogba flew from Nice into Manchester Airport Monday before making his way to the club’s training ground.

Man U is expected to pay the Italian champions 105m euros for Pogba, including performance-related bonuses and other costs.

Despite his arrival, the Old Trafford club still have to formalize agreement on personal terms with Pogba.

Pogba’s return surpasses that of Wales forward Gareth Bale’s £85m move to Real Madrid in 2013 as the biggest transfer deal in history.

Speaking on his exit, Pogba claimed he left the Man United “frustrated” and “disgusted” because former Manager Sir Alex Ferguson did not field him.

Reactions have been trailing Pogba’s return to Man U. Speaking, Gary Neville, the midfielder’s colleague, at United, said it was “important” the club “made a statement”.

Former Newcastle and Liverpool Manager Graeme Souness said: “I think you can be kidded by Pogba because when he moves he’s like a Rolls Royce, but I’ve never seen him get hold of a game and dominate.
“I don’t see him changing that many games. It’s not like they’ve bought a Luis Suarez who will get you 50 goals a season” he added.