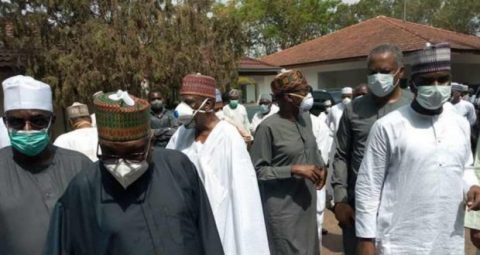 (AFRICAN EXAMINER) – Despite President Muhammadu Buhari’s order that all those who attended the burial of his late Chief of Staff,  Abba Kyari be self-isolated for 14 days, the Chairman of the Presidential Task Force (PTF) on the control of Coronavirus and Secretary to the Government of the Federation (SGF), Boss Mustapha made a public appearance yesterday. (Monday).

Nigerians on social media were outraged following failure of these senior government officials to comply with the lockdown order and Covid-19 social distancing protocol during the burial of the late chief of staff.

African Examiner reports that, after the burial, these officials were immediately barred from the presidential villa and ordered by the President to self-isolate for 14 days in line with the covid19 guidelines.

However, at Monday’s media briefing, while responding to reporter’s question, the chairman of the task force and the SGF, Boss Mustapha said:

“The PTF recognizes, regrettably, the unintentional violation of the principles and protocols that form the core of our messaging to Nigerians, at the funeral of the late Chief of Staff. These principles for emphasis, include: the guidance provided on mass gatherings; social distancing; personal hygiene; and restriction of movements.

“Lessons have been learnt and appropriate measures have been taken to close all gaps. We assure all Nigerians of their safety and the determination of the PTF to combat the pandemic.”

On his own part, the Minister of Health, Dr. Osagie Ehanire said the events were not intended, assuring that members of the task force were responsible persons, who would do everything possible to ensure that the national efforts do not fail.

“The Presidential Task Force is committed to making sure as we move forward, that necessary steps are taken so that this sort of episode does not happen again.