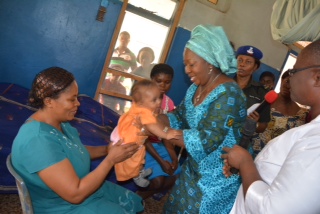 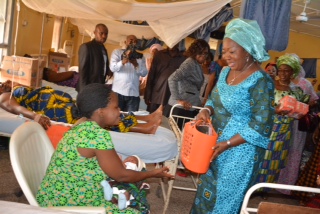 The wife of Abia state governor, Lady Mercy Odochi Orji presenting a gift to a nursing mother at the Federal Medical Centre, Umuahia

The wife of Abia state governor, Lady Mercy Odochi Orji carrying one of the babies whose mothers have been on detention at the Federal Medical Centre, Umuahia due to non payment of their discharged bills.

The wife of Abia State governor, Lady Mercy Odochi Orji has fulfill her promises to off-set the medical bills of some discharged but awaiting bills payment patients at the State University Teaching Hospital, (ABSUTH), Aba.

Lady Orji had while on a sympathy visit to the hospital to see some pupils of a private school in Aba who got injured when a tipper lorry rammed into their school premises and killed three pupils and injured six others was besieged by some patients in the hospital appealing for an assistance to pay for their discharged bills.

The patients mostly accidents victims told the wife of the governor that they are unable to go home and rejoin with their families due to inability to settle their accrued medical bills arising from their hospitalization and Lady Orji promptly directed the hospital management to allow the patients home as she would off-set their bills.

In fulfillment of the promise, the wife of the governor through the Permanent Secretary, Ministry of Women Affairs, Mrs. Nnenna Chikezie presented a cash of more than N750, 000.00 for the payment of the medical bills of more than six patients who remained in the hospital premises before her intervention despite been discharged from the hospital many months after.

Speaking while handing over the cash, Mrs. Chikezie said that Lady Orji’s humanitarian gestures were in line with her complementary governance role and compassionate feelings for the less privileged in the state.

She stated that Her Excellency’s payment of hospital and medical bills of indigent patients particularly those discharged but unable to go home over has been a regular feature even before she became the State First Lady and she has went further through her pet Project-Hannah May Foundation to build residential houses for indigent men and women, empowered many with take-off grant and equipment and promoting maternal, child and public health.

The Permanent Secretary extended the wife of the governor’s commendation of the hospital authority for the quick and quality medical attention given to the school pupils which helped to save their lives and urged them to maintain the standard.

Earlier, the Chairman board of Directors of the hospital, Dr. Kingsley Enweremadu commended the giant strides of the governor in the health sector which contributed significantly to the resuscitation of the teaching hospital and led to saving the lives of the school children.

Dr. Enweremadu said that Lady Orji just like the governor has touched the lives of Abians in a caring and compassionate manner and commended the governor’s wife for the soothing balm she has apply in the lives of the patients which he noted was happening in the hospital for the first time.

In his remark, the Chairman, Medical Advisory Council (CMAC), Dr. Chukwuemeka Onyerua who stood in for the Chief Medical Director on his annual vacation expressed the gratitude of the hospital for the show of love Lady Orji has extended to the hospital patients and disclosed that the patients were allowed home immediately the wife of the governor made the promise.