Abubakar Audu and Timipre Sylva: How Not to Fight Corruption 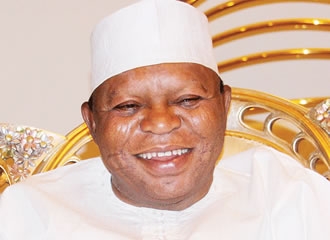 The APC government of President Muhammadu Buhari is determined to wipe out corruption and it is doing everything possible to prosecute the former government of Goodluck Jonathan. The government is working with the British, Swiss and United States governments to recover stolen funds by former public officials and politicians, and in faraway Bombay, India President Buhari told his hosts that he is fighting corruption and the ongoing recoveries and prosecutions are to serve as a “deterrent to others who nurse the ambition of seeking public office solely for illegal personal gain.” But guess who the candidates of the president’s party in Kogi and Bayelsa States are? Oh yes, you are right: Abubakar Audu and Timipre Sylva, both men enmeshed in very sordid charges and accusations of endemic and mass looting of the funds from the very states they wish to contest governorship elections. The choice of the two men is disturbing and shocking, and it makes mockery of the fight to eliminate and kick out corruption in the affairs of the Nigerian state.

The corruption and looting case against Abubakar Audu has been on for several years. Audu is also involved in a bitter domestic/marital dispute with his wife, which has made it impossible for him to enter the United States of America for fear of being arrested and put on trial for several crimes in the US. And then the recent promise by Abubakar Audu to return the sum of N11 billion he agreed he stole – maybe he prefer the word ‘took’ – from Kogi state when he was governor of the state. The social media has been very active since early October when Audu made the promise-to-return loot. By the way where is he keeping such huge loot? Could the money be in his personal vault/home treasury or in some banks? If the promise-to-return was true, then it is an admission by Audu that he stole from Kogi State and looted its treasury when he was state governor from 1999 to 2003. Audu is still being prosecuted by the EFCC and yet he is the man found suitable to bear the flag of President Buhari’s political party! Did the APC review and conducted due diligence on Mr. Audu before clearing him to run? A man pronounced himself guilty by promising to return such a huge volume of stolen funds and he is still able to parade himself as a candidate of a political party, the president’s party? Shouldn’t the EFCC have taken his confession and promise–to–return stolen funds before a judge to request that he be arrested asap and put away? The war to eliminate corruption will become a mockery and a joke if the likes of Abubakar Audu are allowed to contest for any elective position in the land. Against the backdrop of the ongoing prosecution of Audu by the EFCC for stealing N11 billion from Kogi State is the shock that the EFCC has not acted quickly to put Audu away and prevent him from contesting any election.

But note that Audu insisted that he will only return his N11 billion loot if elected as governor of the state! How laughable and annoying, but that is the deal Audu has offered the people of Kogi State. The simple response of the people should be to reject Audu and still demand their money back from him. He is a self-confessed thief who wants to return what he stole to the owners while still asking the owners to entrust their assets to him. This is fiction and a grotesque movie written and produced by Abubakar Audu. But how about the

APC, the political party that is allowing Audu to be its flag bearer in Kogi State; the party that has endorsed the ambition of a self-confessed looter to represent it? Is this not a contradiction of the agenda of the party with its plan to clean up the stable and prosecute thieves and loiterers? The man Audu is so desperate to take control of the treasury of Kogi State once again he has been contesting to return as governor of the state since 2003 when he was defeated by Ibrahim Idris. Audu has the strong support of Alhaji Ametuo, APC chairman in Kogi state, who had declared that “Nobody is a saint. No governor can claim he has not done any malpractice or stolen anything during his time in the office.” Ametuo concluded: “We heard of Saraki’s case and even Tinubu is being accused of stealing funds but the truth is that Prince Abubakar Audu has pledged to return the money to the Kogi treasury when he gets elected on the November 21st. Yes he will return the N11bn or even more than that and that will add to the Kogi economy.” Really? Seriously?

The case of Timipre Sylva is no less serious and shocking. Charges of corruption were filed against Mr. Sylva in May 2013 by the EFCC and that case went on for some time before the EFCC withdrew it and consolidated it with the new one that was filed in June 2015. The fresh charges filed by the EFCC charged Sylva alongside three others who were said to have colluded with Sylva to steal from Bayelsa State, a state that has the huge misfortune of falling into the hands of thieves again and again and again. One of its former governors Diepreye Alamieyeseigha was to be repatriated to face money laundry charges in the United Kingdom when he suddenly died. His death has sent shock waves across the nation considering his recent interviews in the media, his new book and his zeal to fight all his enemies. Sylva was said to have colluded with Francis Okokuro, Gbenga Balogun, and Samuel Ogbuku and for allegedly using three companies, Marlin Maritime Limited, Eat Catering Services Limited, and Haloween-Blue Construction and Logistics Limited to steal N19.2 billion from Bayelsa State between 2009 and 2012, under false pretense of using the withdrawn money to augment salaries of the state workers.

Again it is the APC that has nominated someone with a very serious case of corruption against him to stand for it in the upcoming governorship election in Bayelsa State. 50-count charge and N19 billion at stake should have been enough reason to tell Sylva to go clear his name first and contest later. Is there a code of conduct/ behaviour for party members in the APC? How can people with very serious corruption charges to answer be put forward to contest election in the new Nigeria President Buhari is eager to build? You will expect any candidate of an anti-corruption party such as the APC to be clean and to be of impeccable character. Can Sylva be said to be of impeccable character and squeaky clean? We know the opponent of the APC in Kogi and Bayelsa States cannot be said to be clean and decent, but it was the APC that made so much of getting rid of corruption and promised to introduce new shared values and attitude to the nation. Without mincing words: Abubakar Audu and Timipre Sylva are unworthy and unfit to stand for elective office, any elective office anywhere.