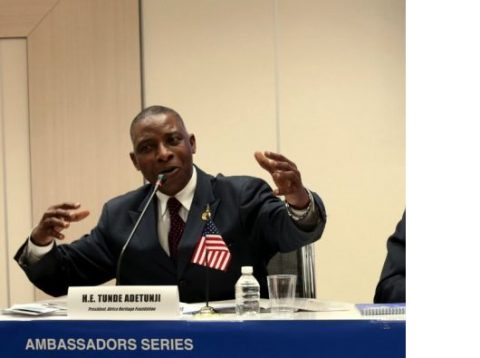 (AFRICAN EXAMINER) – The brain drain syndrome has remained one of the critical issues that are affecting the human resource development index of Nigeria as professionals in various fields of human endeavor are by each passing day jetting out of the country without looking inward. The reason for the migration, which many observers see as retrogressive cannot be far fetched as most professionals rightly or wrongly think that the shores of the countries in Europe, America, and Asia are proverbially greener in pastures.

There is no denying the fact that brain drain has long been regarded as a major problem to countries as a whole including Nigeria, and the problem has been compounded in recent years by the intense global competition for skilled labor. Various schemes designed to make ‘staying at home’ more attractive for skilled emigrants have failed to address the problem. Recognizing that in the era of globalization the prevention of the transnational mobility of skilled workers is neither possible nor desirable, a more radical alternative to the problem of brain drain is been vigorously and passionately pursued by Africa Heritage foundation. The foundation is no doubt achieving its purposes and objectives through a decade long initiative that relies heavily on the idea of bridging the gap, and building the bridge of education and knowledge acquisition.

The initiative which was embarked by AHF as far back as the hosting of centennial Olympics 96 is focused on the 55 nations of Africa, the Diaspora, the USA and the global community with special emphasis on training, diversity and cultural education. Ambassador Tunde Adetunji, CEO and President, Africa Heritage Center & Museum said, “Our major focus has been on brain drain to brain gain, Train the Trainer program  and  building a coalition of  future leaders between young Africa leadership and young African America Leadership program. We have achieved tremendous success through our internship, and study abroad program. “It is also my sincere pleasure to share with you the prospects and potential of the Africa Heritage Foundation, Africa is open for business and the professionals  and  practitioners  Diaspora initiative since the centennial Olympics 96.He explained that the Africa heritage foundation is bridging the gap and building the bridge, transparent and equitable leadership, brain drain to brain gain, sustainable development and Africa matters. He noted that Africa is the future forum and that the conference has gained a global and well-respected attention. Adetunji, who is a professional that has pioneered the initiative for more than four decades, says the culture of the AHF allows for unparalleled personal growth and sustainable development, noting that some of the greatest minds and the most passionate conservatives anywhere in the world drive the foundation.

It would be recalled that Africa Heritage Foundation has had a successful working relationship with Colleges and universities in the Diaspora and in Africa. Besides, it has taken its cause to global space such as its successful event at the United Nation’s SDG7 Conference held in Bangkok, Thailand from February 21-23, 2018.It would also be recalled that as far back as the centennial Olympic 96 The Africa Heritage Foundation in conjunction with Africa World Museum Center; and the Africa Heritage Diaspora Television have made a significant impact  in  USA and the  global community by demonstrating vividly its mission and goal to elevate and promote Africa’s image and potential in the U.S. and the global community through Mass Communication, Exhibition and education on Africa emancipation, cultural values and sustainable growth and  business development. The initiative has no doubt broadened and strengthened the network of Africa nations, potentials, tourism.

In a similar vein, business opportunities have been fully realised and made possible through the endorsement of African Union Commission, the United Nations, the city of Atlanta, the State of Georgia, Universities commission, and other numerous organisation that have aligned their principle with the Africa Heritage foundation legendary project of bridging the gap and building the bridge. Adetunji asserted that, “The Foundation has facilitated educational project in the form of academic and scholarship project through its training and development, brain drain to brain gain and youth leadership program me. The goal is to discover, train and develop future leaders by turning their passion to purpose with integrity total commitment and dedication. The Train the trainer program of the foundation in Marietta and Atlanta Ga. focuses on entrepreneurship, job creation, business development under which the Africa open for business with direct connection between Africa and USA and the global community matters most with the direct transportation, importation and exportation of goods and services”.

Respondents that spoke to DAILY INDEPENDENT on this were unanimous in their views that Adetunji is working in the right direction. One of them, Mr. Henry Omobolanle said: “The movement of skilled workers internationally represents brain gain for the countries that reap their skills and experience and brain drain for their countries of origin. On the brain gain side of the divide, countries increasingly are looking to position their immigration policies to attract the types of international workers and students whose skills they desire. On the brain drain side, the development impacts of losing educated workers are being assessed in immigrant-sending and receiving countries alike as the research presented here shows”.

He reasoned that his confidence on the activities of the foundation being steered by Adetunji is hinged on the fact that educational project, training and development, brain drain to brain gain and youth Leadership program are the means which the foundation has been employing to ensure that its objectives are achieved. Mr. Ifeanyi Iwuchukwu said, “The foundation efforts are laudable but it would be nice if it would be able to identify Africans in diaspora that are longing to return home.He hinged his advice on the fact that some of them are increasingly facing complicated processes of getting resident permits, good jobs, or other hassles that are embedded in living in self-imposed exile abroad. He added that “endemic marital disputes and divorces, issues with raising children or loneliness and alienation”, are some of the prevalent challenges being faced, noting that these have raised doubts whether the grass is truly greener in their country of domicile. Many were of the view that Ambassador Adetunji, a multi-talented philosopher, an outstanding citizen of Georgia is equal to the task in ensuring that one of the purposes, which AHF is built upon, would be achieved.

Many were unanimous in their views that Adetunji as a visionary, an idealist, a realist, and a pioneer of many successful projects would achieve the objectives of AHF. They noted that he has successfully worked towards the betterment of Africans in Diaspora through human resources and  capacity building for sustainable  development, Research Institute and center for museum of  cultural Anthropology, Radio and Television studio, Speaking Engagement and Train the Trainer, and Better life for  humanity  in  the  21st c century  and  beyond. Speaking recently to DAILY INDEPENDENT, he expressed his belief for the concept of “One world’,, noting that a world government must, and will come together because there is no other remedy for global problem other than for the adoption of the citizens of the world by every country.  He called on the Jews in diaspora, India in Diaspora, Chinese in Diaspora, Irish in Diaspora and African in Diaspora, and all other world  entity in Diaspora to  work together towards the new world order of change  and  transformation sweeping across the  globe for a better and  most  prosperous  place   for humanity.

On the Celebrated Africa journey through the ages of exhibition which debuted and promoted tourism and the centennial Olympics 96 globally, Adetunji emphasised that the exhibition has  underscore its significance from the anthropological point of view and has proved beyond  reasonable  doubt  that Africa  is the cradle  of  civilisation and  the birth of  mankind. The exhibition which comprises of over five thousand unique images with 250 mediums of Arts, ranging from wood carving, collages, stone carving, metal works, fiberglass, cow horn, tapestry, acrylic, oil painting, engraving, wood burning, will be showcased in New York as follow up on the project on sustainable project and renewable Energy and also billed for world tour at the Tokyo Olympics 2020./