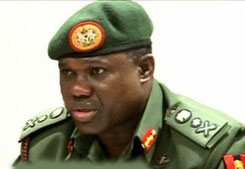 After second day of heated debates on whether to approve or reject extension of emergency rule in Adamawa, Borno and Yobe States, the senate has summoned the Service Chiefs to appear before it Thursday to shed light on the desirability of the request.

This state of affairs made the Senate to go into another round of closed door session on Wednesday which lasted for about two and half hours without also arriving at any concrete decision on the request.

The Senate only agreed to summon the Service Chiefs today (Thursday) for further information on the desirability or otherwise of the request.

Announcing the summon, the Senate President, David Mark, said: “At the second day closed door session of the Senate on request letter from Mr President seeking for another six months extension of emergency rule in Adamawa, Borno and Yobe States as a result of Boko Haram insurgency, the Senate had very robust and detailed discussions on the subject matter and resolved to invite the Service Chiefs for situation reports before final decision can be taken”

Making further clarification on what transpired at the second day closed door session, the Chairman, Senate Committee on Information, Media and Public Affairs, Eyinaya Abaribe (PDP Abia South) , said the decision of the senate to invite the Service Chiefs was for them to be better informed on the best decision to be taken today.

He said: “Senate met today (19th November 2014) in another closed door session to consider the request of Mr President on emergency rule extension for the affected three states.

“The discussions like we have earlier said, was very frank, robust and acrimonious but for purpose of having further information on what decision should be finally taken, we have invited the Service Chiefs to brief us towards taking a decision that will be in the interest of Nigeria and Nigerians at the end of the day”

He also disclosed that the Senate President was also mandated at the session to get across to the respective governors of the affected states on current situations on ground in relation to the Presidential request at hand.

In separate interviews with journalists, after the closed door session, Senators Ahmad Lawan (APC Yobe North) and Kabiru Gaya ( APC Kano South) said none of the eight conditions agreed with the Service Chiefs before the approval of the last emergency rule extension have been fulfilled.

“Many of us are opposed to it; I am particularly vehemently opposed to it. I believe that we should explore other avenues but some other people feel differently. The discussion continues tomorrow.

“The truth is that we have accepted in the past to pass the state of emergency and granted two requests of extension. For 18 months, the extension and the operations did not work for us and we believe that there is no point to continue to go through the same path, the same process and the same system. Could the president, under section 218 not use the military to fight insurgency in the North East?

“We haven’t succeeded in the last 18 months and I am convinced beyond any reasonable doubt that this time around, it would not make any difference”.

“The last time we granted request to further extension, there were eight conditions which were spelt out to be met, None of the eight conditions have been fulfilled and therefore, I don’t believe that there would be any difference if we give any condition this time around again”.

Kabiru Gaya based his own opposition to the request on the grounds that under the emergency rule, more and more territories are being captured by the Boko Haram insurgents in the affected states.

His words: “First of all, we are very much concerned with the killings and happenings. We are talking of state of emergency in the three states of the North East. “You remember last time when we gave that extension, before the extension, we had a lot of arguments here, and then we finally agreed.

“But assess what happens in the last six months after we granted the extension. Before we granted the extension non of the local governments was under the control of Boko Haram but now in Borno State, we have 14 local governments out of 27 under the control of Boko Haram, so does that mean that the granting of additional six months will help?”

“The state of emergency did not work there in that case. We have problem also in Borno, Yobe and Adamawa states, we lost two or three local governments in Yobe State and almost five local governments in Adamawa State. So the whole thing is retrospective, it’s going backward, it’s reducing. The problem is escalating, Borno camp has the highest number of refugees in Africa, I believe and we have over 25,000 to 30,000 people being paid daily to take their three square meals.

“So we believe there are a lot of questions to be answered by the service chiefs. We can’t just simply grant the state of emergency just like that without inviting them to tell us what really happened, because we gave eight conditions before when we granted the last request and no condition has been met.”