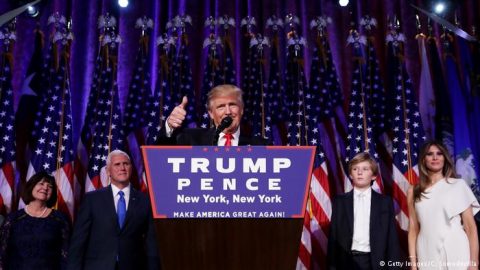 BALTIMORE, MD (AFRICAN EXAMINER) – Despite attaining victory through the system, US President-elect, Mr. Donald Trump has decried ‘’Electoral College’’ and declared he aligns with a simple vote.

Mr. Trump claimed he could have won the popular vote against his rival, Mrs. Hillary Clinton, if he had campaigned differently.
Speaking during an interview Sunday, Mr. Trump said with one State left to count, Mrs. Clinton has nearly a million more votes than him, but lost last week’s election due to the Electoral College system.
The President-elect contended that the Electoral College system was unfair, therefore, preferred a simple vote.
“I would have campaigned in N.Y. Florida and California and won even bigger and more easily” the president-elect said on Twitter.