Another Twin Bloody Blasts Kill Many In Kano 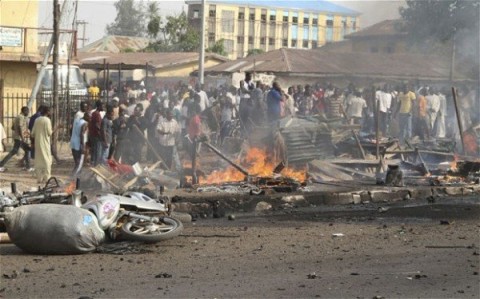 Less than 24 hours after the Yola bomb blast, many people were again killed Wednesday, after two suicide bombers stormed a GSM market in Kano with Improvised Explosive Devices (IED).

The first young suicide bomber, eyewitnesses said detonated his explosives at the entrance of the congested market, while the second older bomber, opened the explosive at the centre of the market.

Many also sustained severe injuries due to the deadly blasts.

The residents and survivors gave their support, by removing the dead and injured from the rubbles of the explosion.

The State’s Police Commissioner, Muhammadu Katsina, has confirmed the bloody incident, as well as confirmed that the two blasts were carried out by two female suicide bombers.

Commissioner Katsina put the number of the dead at three.

Recall, a total of 32 people died Tuesday, while over 80 injured yesterday in Yola, the Adamawa State capital Tuesday, in another bloody bomb blast at a motor park.