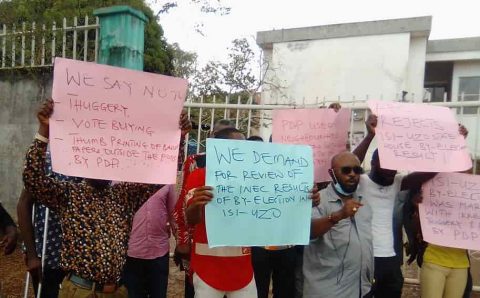 The conduct of the bye election followed the demise of the former member representing the constituency, Mr  Chijioke Ugwueze, who died early this year during the Covid 19 problem

Mrs Ugwueze, the PDP flagbearer, is widow of the deceased lawmaker.

Members of the APC from Isi Uzo state Constituency of the state had on Monday staged a peaceful protest with placards at the INEC office in Enugu.

Addressing newsmen alongside Candidate of the party, during the protest, a Chieftain of APC in Enugu state, Chief Chinedu Jideofo-Ogbuagu, said that the result as declared by the electoral umpire was unacceptable to them.

Jideofo-Ogbuagu insisted that the outcome of the exercise was contrary to how the people of the area had casted their votes.

According to him, the victory of the APC in the election was ‘stolen’, adding that INEC ad hoc staff collaborated with those who unleashed terror on the exercise.

“Majority of those who came out voted for the APC but they used thugs to chase away the people and changed the results”, Jideofo-Ogbuagu said.

Also speaking, the APC Candidate in the election, Engr McDonald Okwor said that he had believed the assurances from INEC that the election would be free and fair.

Ejiofor alleged that their agents were chased out and not allowed to witness collation of results.

He said that the election was marred by all manners of irregularities including multiple voting and massive thumb printing, adding that some APC supporters got bodily injuries, following the mayhem PDP political thugs allegedly unleashed on them.

The APC Candidate said that he was weighing other legal options in a bid to get justice.

Our correspondent reports that despite the huge noise the protesters made, no INEC Staff came to address them.

However, when African Examiner contacted, the State Resident Electoral Commissioner REC, Dr.  Emeka Ononamadu, on phone he said that he was surprised that the APC people were protesting.

He words: “Why are they protesting? Their agents were there when the results were released.

Some of the placards displayed by the protesters made up of young and aged peoples read thus: “APC rejects the Saturday’s Isi Uzo  bye election result. It is unacceptable to us.

Some the placards displayed by the protesters read thus: “APC rejects the Isi Uzo bye which was marred by irregularities thuggery, and rigging by PDP.

“We demand for a review of the INEC result of the bye election. INEC adhoc Staff were bribed by PDP. They Corroborated with PDP to rig the election

“The result of the bye election is unacceptable to us, it was marred  by irregularities and electoral fraud.

“We demand for a review of the INEC result on the bye electon, because it was marred by irregularities, thuggery and rigging by PDP.

*INEC adhoc Staff were bribed, and they collaborated with the PDP  to rig the election. We are saying that they should return our stolen mandate to our Candidate, Engr. MacDonald Ejiofor Okwor who won the election.

“The result of the bye election is unacceptable to us, it was marred by irregularities and electoral fraud.