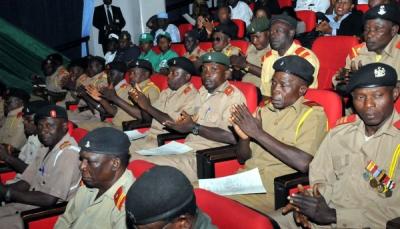 Announcing the donation while being decorated with the remembrance emblem, Senate President, Dr. Abubakar Bukola Saraki, said the gesture was to appreciate the sacrifices made by members of the Armed Forces in providing and maintaining peace and security in the country.

Apart from the N12 million, Saraki, according to a statement by his Special Assistant on Public Affairs, Mohammed Isa, said each Senator would make an individual donation to the Legion, since nothing was too much towards supporting the nation’s retirees and keeping the memory of fallen heroes alive.

Saraki assured the veterans that, the Senate ’’ …will continue to give our support and commendation to men and women in the Armed Forces for what you have continued to do in providing peace and stability in this country.

“We must commend those that are still serving and those who paid the ultimate sacrifice by laying down their lives for the unity, peace and stability of this country.

“The Senate will continue to work closely and collaborate with the Armed Forces on the area of welfare, professionalism and improved condition of service for our military.

“For the veterans, who are being remembered during this period, it is our responsibility to ensure that they can live a life with lots of relief, peace and tranquility, and to also ensure that their living standard is appreciable,” he said.

Earlier, the National President of the Nigerian Legion, Capt. Micah Gayja, said proceeds of the sales of the emblem would be used in assisting members of the association.

Gayja said it was from money realized from such sales last year that the Legion empowered 50 women, granted scholarships to 50 children of fallen soldiers, offered financial assistance to another 50 aged retired soldiers in addition to humanitarian assistance to Internally Displaced Persons (IDPs) camped in Bauchi.