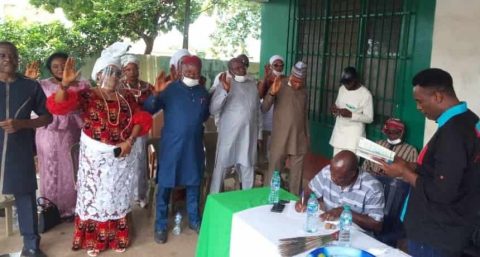 (AFRICAN EXAMINER) – The  lingering crisis bedeviling the Enugu state chapter of the All progressive congress (APC), occasioned by the rift between the state Chairman, Dr. Ben Nwoye, and Nigeria’s foreign Affairs Minister, Mr. Geoffrey Onyeama, has been finally laid to rest, as loyalists of the Minister, have dissolved their parallel structure and agreed to work together for the common good of the opposition party in the state.

African Examiner reports that the development is born out of a peace accord initiated by the party’s national leadership which recently asked all aggrieved members across the country who are in courts to withdraw their suits and embrace internal mechanism in resolving their differences.

The Enugu state APC members said in one voice that with the development, the party has once again, become formidable and now one big United family that can go into future elections with one voice.

It would be recalled that the Minister and his supporters had shortly after the party’s last congresses, formed their own parallel structure led by one Deaacon  Okey Ogbodo, who was parading himself as  factional state chairman.

Speaking Wednesday at the APC state Secretariat during the inauguration of a 10 – man contact and mobilization committee, headed  by the state pioneer Deputy Chairman, Comrade Adolphus Ude, who is among the Ministers supporters that embraced the peace accord, state Chairman of the party, Dr. Nwoye, said  “the crisis in the party is now a thing of the past.

He said: “Our effort is just to have a one united, and indivisible party that can participate and win future elections in Enugu state adding that all the chieftains of the party in the state were all  aware and disposed to the peace that has returned to the party.

Before the reconciliation, Comrade Ude, was one of the leaders in the Minister’s camp, and had served as former deputy chairman to the incumbent state chairman, Dr. Nwoye.

Dr Nwoye, explained that the setting up of the committee was part of the terms of reconciliation and deliberate efforts to forge unity and carry all the stakeholders along, ahead of the October 31st 2020 state Assembly bye-election and the 2023 general election.

He disclosed that APC will participate in the said bye election which has been fixed by the Independent National Electoral Commission INEC, following the recent death of the member representing Isi Uzo state constituency, Hon. Chijioke Ugwueze .

According to  the state Chairman, who had in his remarks  recognised the foreign Affairs Minister as “our leader”, charged the Ude led committee to rally all the members, especially those at the grassroots, to strengthen and grow the party’s membership in order to win elections in the state.

Dr. Nwoye emphasised that the assignment of mobilizing and reconciling party members was not the exclusive responsibility of the Committee as other party members have the duty to play their role while the committee drives the process.

“This exercise is part of efforts to consolidate the newfound unity in our party. This wouldn’t have been possible few months ago, but we must build this house together and all the issues have been resolved, today we have one APC in Enugu state” Nwoye stated.

Addressing the party faithful during the ceremony,  the chairman stressed that “Our aim is to build one indivisible party that will be strong to win elections in Enugu State, so, we are happy that APC in Enugu state is now one big united family, as it used to be

Dr. Nwoye, who is also Secretary of APC state chairmen Forum, told the part faithful  that “the Minister of Foreign Affairs, Onyeama; the party financier, Emperor Chris Baywood Ibe; former President of the Senate, Ken Nnamani; the guber candidate of the party in the 2019 general elections, Senator  Ayogu Eze, among other top notchers of the part in the state were aware and part of the reconciliation process.

Chairman of the Committee, Comrade Ude, in his response  on behalf of other members  assured the state chairman that they  would work hard to deliver on their  mandate, adding that the committee would do everything within its powers to strengthen the party structures at the grass root levels, which includes ward and local government areas.

Comrade Ude, who acknowledged that the state chairman, Nwoye was the soul of the party in the state, stated that  the committee will ensure that the party penetrates the localities in order to establish formidable ward and polling booth executives, pointing out that party affairs are conducted at the grassroots not in the city centres.

The event was attended by a good number of members of the Ministers former group, including some top chieftains of the party.