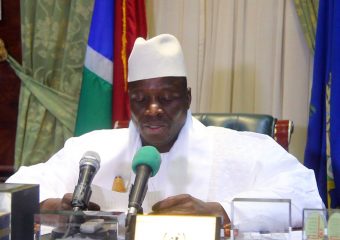 Jammeh was forced to reach a deal with West African leaders who had opted for regional military intervention.

It would be that Jammeh eventually accepted to hand over power peacefully to President Adama Barrow, who still resides in the neighbouring Senegal for the ex-Gambian strongman to leave.

Marathon talks with Guinea’s Alpha Conde and Mauritania’s Mohamed Ould Abdel Aziz yielded agreement that he would go, but Conde remained in Banjul Saturday to hammer out the finer details.

The agreement “foresees the departure of Yahya Jammeh from The Gambia for an African country with guarantees for himself, his family and his relatives,” Aziz said on return to Nouakchott in remarks quoted by the official AMI news agency.

Several sources speculated that Jammeh was likely to leave Banjul Saturday, but so far there has been no clear agreement on where he would go, although, Morocco, Equatorial Guinea and Mauritania are the possibilities suggested by diplomats.
Activists will be keen to see Jammeh — who controlled certain sections of the security forces — refused amnesty

The former President allegedly committed many crimes, including rights abuses, during his 22 years tenure. AFP