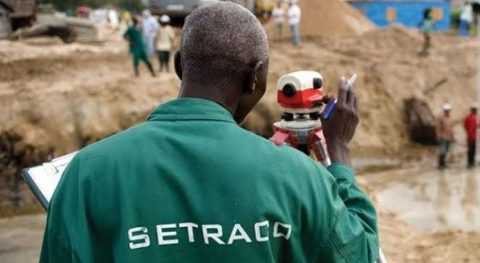 They form the grounds of the suit instituted by the family of the late construction mogul against Engineer Khalaf.

In a related development, Khalaf and his proxies have allegedly made moves to obtain an ex-parte order to freeze the bank accounts of SNL in order to disrupt the company’s businesses and operations, moves that the management was said to have urged the judiciary to reject. The management, as learnt, would want Khalaf and his proxies to approach the court by way of a Motion on Notice.

One of the questionable financial wrongdoings that have emerged concerning the subcontracting of civil engineering works to one of Engineer Khalaf’s shell entities, Foundation Tech Limited (FTL).

Khalaf is also alleged to have assigned contracts won by SNL to other companies in which he has interests without the consent of the board of SNL and also without proceeds shared with SNL.

Listed among the other entities are Setramech/Levant Construction Company Limited and Rockbridge Construction Limited.

Khalaf is said to unilaterally fix a charge ranging from 7-15% of contract fees on all revenues (including unearned revenue like mobilization for awarded contracts) of SNL as “service fees”, thereby earning double compensation for his role as a director.

According to the claim before the court, the total of such fees earned from February 18, 2008 to July 6, 2015 when it was discontinued, following the intervention of the son of the late Chairman, Alhaji Inu Umoru, who is the new chairman, Engineer Abu Inu Umoru, amounted to approximately USD27 million.

Another sore point was the use of SNL’s assets to realize the objectives of Engineer Khalaf’s other business interests without paying for such use.  Cited as an example was Sunrise Estate Development Limited being one of such entities that enjoy a pre-financing privilege from SNL and which today exceeds N1.2 billion with some of the certificates past due by over five years.

It was claimed that SNL got four road contracts from the Kwara State Government from 2004 to 2012 totaling a contract sum of N8.43billion, which were seconded for execution to Setramech/Levant without the knowledge of the partner, Alhaji Inu Umoru (deceased). Khalaf was accused of deploying SNL’s funds, equipment and personnel in executing these contracts.

When one of the Nigerian staff members started asking questions about how the expenses were to be reported, Khalaf ordered that Setramech/Levant personnel be made signatories to the SNL’s GT and Diamond Bank accounts opened for the projects, thus keeping the SNL personnel in the dark; but records have it that Khalaf was the sole beneficiary of the proceeds of the contracts.

According to available records, the initial funds amounting to N779m spent on the first two contracts by SNL were never recovered back to the coffers of company.

Going by the claims before the court, SNL built a metallurgical fabrication workshop at Mpape to aid in the production of formwork and other ancillary fabrications, but that Said Khalaf floated a company then called Global Equipment Solutions (GES) Limited and instructed that the new company should take over the assets of SNL workshop in June 2009.

According to further claims, the value of the workshop (aside the building) was N82.6 million, and that without revaluation of the assets and consent of Alhaji Inu Umoru, Khalaf caused SNL to cede the entire workshop to GES at a paltry sum of N54 million.

Furthermore, it was claimed that GES started fabricating for SNL without a contract but forwarded debit notes at will without proper accounting procedures.

SNL, as claimed, paid N2.53 billion to GES from 2009 to 2017 for mostly unverifiable jobs; in addition to the claim that the liquidated GES in 2017, when SNL’s financial situation could no longer support the pilfering, sold all the equipment including the restaurant furniture and fittings, which had nothing to do with the workshop, without paying their net indebtedness to SNL, which is currently in excess of N379 million.

The other claims, among many more, are as follows:

That Said Khalaf incorporated over 25 different companies within and outside Nigeria in the last 41 years to do business solely with SNL without informing his partner and without approval of the board of SNL.  The total sum, owed by these companies to SNL with verifiable evidence, is in excess of N4.0billion while those with inconclusive evidence are in excess of N5.0billion

That he (Khalaf) engineered a kangaroo technological support deal by which he claimed to be rendering technical support via Setraco International Holding (SIH) to SNL; and, that the deal was non-existent on ground but only on paper with a view to siphoning SNL’s funds to Lebanon.

That through the deal, SNL supposedly owes about N3.5billion.  This is outright fraud.

That bank accounts were opened in the name of SNL in Bank of Beirut and Lebanese Swiss Banks in Beirut, which only Engineer Khalaf and his family members/surrogates operate without accountability. All signatories to the accounts are Lebanese and non-resident in Nigeria.

That bank statements of account are never sent to Nigeria at their instruction but only excel worksheets from the Lebanese Finance Director to the Chief Accountant for reconciliation purposes; and, that the implication of this is that drawings from the accounts are shrouded in secrecy.

It would be recalled that having failed in their alleged ploy to stop bankers and vendors from doing business with the company, Khalaf and his proxies issued a public notice in ThisDay, The Guardian, Daily Trust and The SUN from 17th to 22nd September, 2019, claiming to be majority shareholders and that they shall not take responsibilities for any liabilities created by the current management of the company because of the ongoing litigations in Court.

The management’s disposition to their action was that it was clearly subjudice.

A top source in the company said “Unfortunately, they have yet again failed woefully to achieve their objective.”

The source confirmed that “their (Khalaf and his proxies) next cause of action is to go to a remote court to procure an expert interlocutory injunction restraining banks in Nigeria from doing business with the Company.

“Since the implication of such an order will have devastating effects on the activities of the Company, the management urges that no Nigerian Court should entertain such a bizarre request except it is coming by way of a Motion on Notice.”

“The fact is that the other stakeholders in SNL, aside the shareholders, are much more numerous and far more important to be ignored by some aggrieved shareholders who are hell bent on killing the Company because they can no longer carry out their dubious and fraudulent activities.”