The Nigerian Military has described the escape on Monday of the National troops to Cameroon sequel to the Boko Haram insurgents attack on Gamboru and Ngala towns as a tactical maneuver. 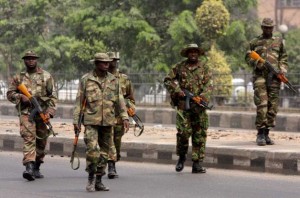 Spokesperson for the Cameroon’s Army,  Lt. Col. Didier Badjek confirmed that the fleeing troops took refuge in Maroua, a cameroon town of 80 kilometres from the Nigerian border.

A press statement issued by the Defence headquarters revealed that the soldiers after landing in Cameroon surrendered their arms and weapons to prove non-violent mission in the neighboring country.

The statement also confirmed communication between the Nigerian and Cameroonian authorities over the development as well as return journey plan to the country.

BBC reported earlier in the day that over 400 Nigerian soldiers fled as they were overpowered by the dreaded insurgents in a renewed invasion which involved attack on army barracks, Gamboru and Ngala towns in Borno state as well as house to house raiding.

Defence high hierarchy like it did yesterday when Gwoza was declared the “Islamic Caliphate” by the insurgents’ head, Abubakar Shekau, have dismissed reports that its force were dislodged by the militants.