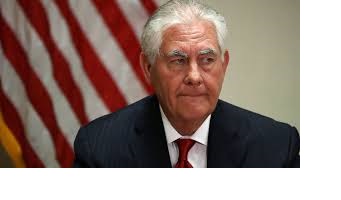 (AFRICAN EXAMINER) – US President Donald Trump has sacked Secretary of State Rex Tillerson, replacing him with the director of the CIA, Mike Pompeo.

Thanking Mr Tillerson for his service on Twitter, Mr Trump said the new state secretary would do “a fantastic job”.

Mr Tillerson, a former chief executive of ExxonMobil, was only appointed to the job just over a year ago.

The Department of State said Mr Tillerson had not spoken to the president and was “unaware of the reason” for his firing.

According to Under Secretary Steve Goldstein “the Secretary had every intention of staying because of the critical progress made in national security.”

Mr Tillerson was on Monday at the Presidential Villa, Abuja assuring President Buhari of US resolve to support Nigeria in rescuing the abducted Chibok and Dapchi schoolgirls.