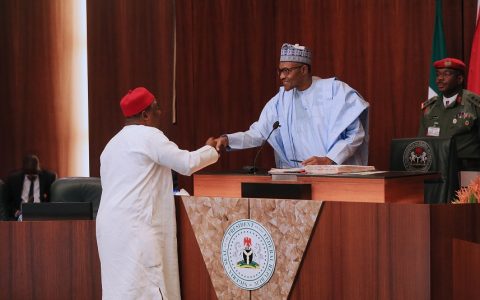 By Ganiyu Nasirudeen with the Agency Report

(AFRICAN EXAMINER) – President Muhammadu Buhari has inaugurated the board of the Revenue Mobilization, Allocation and Fiscal Commission (RMAFC) with the pledge by the body to work towards “increasing the revenue shared’” by the three levels of Government.

he RMAFC is the body responsible for preparing the formula for sharing revenues among the three tiers of government in the country.

The body is also responsible for fixing the remuneration of political office holders as well as monitoring the revenues accruing to the federation account from revenue-generating agencies.

In his inaugural speech, Mr. Mbam, promised that the Commission would work towards increasing the revenue shared by federal, state and local governments.

The Senate, had on May 8, confirmed the reappointment of Mbam from Ebonyi State as the Chairman of RMAFC.

He said that the President was emphatic in tasking the Commission to deliver on its mandate, pledging that the body would work towards that.

“We need to increase the sources of revenue to the federation account; in other words, we will concentrate more efforts on how to increase of the size of cake for allocation to the three tiers of government instead of struggling to share a shrinking cake.

“So, the commission will key into the diversification programme of the Federal Government with a view to finding other sources of revenue that will increase resources to the federation account.

“One of our responsibilities is to review the revenue allocation formula and I am saying that we will deliver on our mandate.

“The issue is not just to add and subtract; it derives through a process; whatever you get is derived through a process; more responsibilities, more money,’’ Mbam said.
On staff union’s concern about engaging consultants instead of allowing RMAFC’s staff to work, he assured that everybody would be given his fair due’’Mbam said.

According to him, there are some issues that require specialised attention; hence the need for services of the consultants.

“But everybody knows the schedule of his duties and we cannot deprive anybody from his schedule of duties,’’ the Chairman restated.