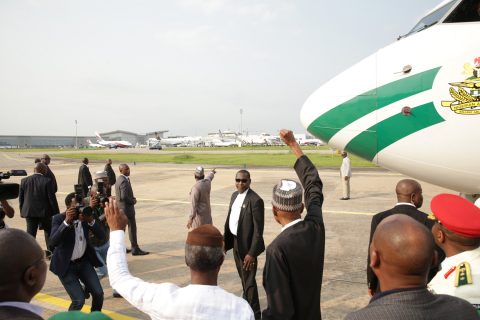 (AFRICAN EXAMINER) – Major roads and streets of Enugu, South- East Nigeria, was on Monday shut down by jubilant members of the state Chapter of Buhari Support Organisation (BSO, who were celebrating the safe return of the Nigeria’s president to the country .

President Buhari, returned to Nigeria  last Saturday after spending 103 days  in London, where he went for medical treatment.

The Enugu state BSO members, had earlier converged at the organization’s office at Independence layout, Enugu, where they were addressed by chieftains All progressive Congress APC in the state, before moving round parts of the state, chanting various pro Buhari songs.

African Examiner reports that some of the APC stalwarts in the state who addressed the gathering included the party’s national Vice chairman in South East, chief Emma Enukwu, the state chairman, Dr. Ben Nwoye, Director General of Voice of Nigeria, VON,  Mr. Osita Okechukwu, member of Board of Trustee, (BOT) of the party,  representing  the state,  General Josef Okolagu, retired, among others.

All the speakers, particularly the VON boss, had thanked God for the president’s safe return to the country, calling on people of the state, South- East,  and country in general to continue to give the Buhari’s led APC federal government their support.

Okechukwu said president Buhari means well for Nigeria, and should be given all the support so as enable accomplish his a dream for the country, adding that the president is in hurry to address the economic and political challenges confronting the nation.

However, a statement signed by Chief Anike Nwoga, the state chairman of BSO and  the Secretary, Barrister Godwin Onwusi said, “we happily welcome back our dear President Muhammadu Buhari, GCFR, back to our fatherland after his medical sojourn abroad.

“BSO is in prayers with you Mr President, as we welcome you back to continue as a matter of urgent national importance the good works of fixing our physical and social deficit infrastructure – electricity, roads, railways, education, health etc.

The group, urged the president to appeal to the National Assembly to immediately approve the $29.9 billion foreign loans and more to get Nigeria out of recession and back to work.

“For it insults our imagination that our Distinguished Senators and Honourable Members who were able to table 33 items of amendment of the 1999 Constitution of the Federal Republic of Nigeria in one day and pass almost all in one day, are taking over one year to approve all the foreign loans?

“Mr President, in the midst of the plunge in oil revenue, and the truism that oil prices may not rise soon; it is BSO’s considered view that more loans be obtained to quickly diversify our economy and provide the economic security you mentioned in your speech.

The stated added, “Mr President, you can imagine millions you will put to work, if additional $20 billion loan is added and the coastal, the Lagos-Kano, Port Harcourt-Maiduguri modern standard rail lines, Mambilla Hydro-power plant, Enugu Coal to Power, East-West, 2nd Niger Bridge, Enugu-Port Harcourt, Enugu-Onitsha and other federal roads and the most importantly agrarian revolution takes off?

“We also humbly request Mr President,  that all outstanding federal boards and other appointments be dished out  with immediate effect; as both the Holy Bible and the Holy Koran prescribe that those who work in the vineyard should eat from the vineyard.