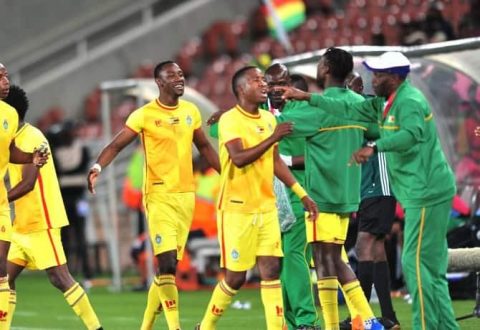 (AFRICAN EXAMINER) – Zimbabwe national soccer team’s preparations for the 2021 Africa Nations Championship (CHAN) have been dealt a heavy blow after nine players tested positive to Covid-19, just over two weeks before the tournament kicks off in Cameroon.

Training was immediately called off Tuesday morning after the players tested positive following tests conducted on Monday in line with Covid-19 health protocols.

The team however remained in camo until further notice, said the Zimbabwe Football Association in a statement on Monday.

The Warriors, as the Zimbabwe senior men’s soccer team is known, had been released to go on a Christmas Holiday last week after spending two weeks in camp where they had played a number of friendly matches with local clubs.

“The Zimbabwe Football Association (ZIFA) would like to inform the football fraternity and the nation at large that nine players who are part of the African Nations Championships (CHAN) provisional squad have tested positive for Covid-19. In adherence to our Covid-19 medical protocols, all players and members of the technical team were tested on Monday (28 December 2020) upon their return from festive break and nine were ruled to have tested positive,” said the association in a statement.

ZIFA management said all affected players had been notified and isolated in line with World Health Organisation (WHO) regulations.

“ZIFA has also informed the Confederation of Africa Football (CAF), Sport and Recreation Commission (SRC) and the city health department for further guidance,” read the statement.

All training sessions have been suspended pending further consultations and guidance.

Coach Zdravko Logarusic had named a provisional squad of 34 players before releasing others when preparations started early in the month.

The competition will be held in Cameroon starting on January 16. It was initially set for April 4 to 25 this year but was cancelled because of Covid-19 outbreak.

Chan is a competition for only home-based players which gives them the opportunity shine on the continental context.

Zimbabwe was drawn in Group A with hosts Cameroon, Mali and Burkina Faso.

Zimbabwe’s premier league is inactive, and players have not been active since the start of the year and this gives a headache to the coach.