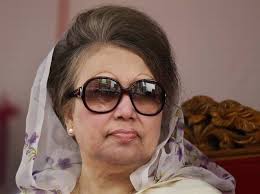 (AFRICAN EXAMINER) – The Bangladeshi police and thousands of protesters have clashed as the opposition leader Ms. Khaleda Zia was jailed for five years over corruption.

The trial against Ms. Zia centred around the sum of $252,000 meant for an orphanage trust which was set up when she was still serving as the Prime Minister.

Zia’s son Tarique Rahman was slammed with 10 years in jail in absentia as he is in London. The same jail term was handed down to four of her aides.

The ruling was made in a court in Dhaka after which the police used tear gas to disperse thousands of her supporters.

Ms. Zia was found guilty of embezzling the huge amount. However, the ex-PM denied misusing the international funds.

The pronounced jail sentence may mean that the 72-year-old opposition is barred from parliamentary polls due later this year.

Beside the current, Ms Zia, a long-time rival of the current Prime Minister Sheikh Hasina is also being alleged to have a list of alleged corrupt related cases against her.

The daring politician has described the charges against her as politically motivated.

She pacified her weeping relatives when came inside the court room, not to be worried, as she boasted “I will be back..”