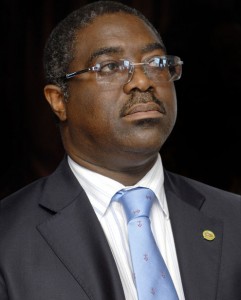 The Lagos Internal Revenue Service, LIRS, is currently embroiled in crisis as staffs of the agency are calling on Governor Babatunde Fashola to remove the Chairman of the organization, Tunde Fowler.

Fowler was said to have resigned last week to pursue his governorship ambition, but he has denied his resignation through series of paid adverts in the newspapers.

The LIRS is the major revenue generating organ of the Lagos State Government, raking in about N29 billion into government’s coffers on monthly basis.

The LIRS workers mostly from the Audit department had said the continued stay in office of fowler would in no distant time lead to total collapse of the LIRS.

They also demanded for an independent of inquiry into the years of leadership of Fowler at the helm of affairs of the body they said raked in over N29 billion monthly as IGR into the state coffers.

The protesting LIRS workers said their latest demand for the sack of its Chairman followed the recent sack of 16 staff, including relatives from prominent Traditional class in the state. They wondered what justified the sack of the workers by Fowler after devoting time and energies to collecting revenue for the state even without training for several years after their employment.

Rather, the angry staff said Fowler and his cabal at the LIRS have only been engaged in face-saving training for the so called senior and management staff with recent conducted in Ghana.

The sacked staff who were asked to go for poor performance in the year 2013 exam conducted by LIRS were among over two thousand that took part in the exam.

According to them, result released by the agency showed that over five hundred passed as just about seventy of them close to the Chairman got promoted.

Some of them who lamented that they have not been promoted more than five years of contributing their best to the growth of the state’s economy challenged Fowler to tell the world what has become of the performance bonuses to staff  reduced to twenty thousand naira from forty paid twice a year instead of monthly basis.

They alleged that Fowler and his cabal were deducting the money to fund his rumored 2015 Governorship ambition in Lagos State. Along with financial misconduct leveled against the LIRS Chairman was the hiring of office complex that could barely take 300 staff for over two thousand and the delay in the payment of their February salary.

They also accused Fowler of allocating juicy companies for Audit to TAMA who paid him huge sums of money in returns.

According to them, if agency like LASAA that do not generate up to twenty percent of what LIRS made monthly could boast of a first-class and intimidating office apartment then what stops LIRS from having same.

The LIRS staff lamented that they have become a source of money making to LASTMA officials that towed their cars daily since there was little or no parking space within their premises. They threatened to embark on a peaceful protest to the state House of Assembly if Governor FASHOLA failed to intervene urgently and take necessary steps on the matter.