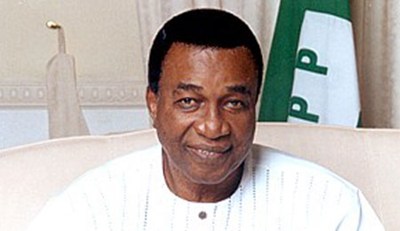 Nwobodo, was the first executive Governor of old Anambra State, as well as a one time Minister of sports, while Senator Okoro, represented Enugu North senatorial district between 1999 and 2007.

They announced their defection to APC at the party’s stakeholders meeting convened by the Minister of Foreign Affairs, Mr. Jeffrey Onyeama who hails from Enugu state.

Nwobodo was recently named by embattled former National Security Adviser (NSA) Col. Sambo Dasuki (rtd) among those who benefited from the multi-billion naira Armsgate fraud, currently being investigated by the Economic and Financial Crimes Commission (EFCC).

The former Governor denied any wrongdoing, saying that the N500 million released to him by the NSA was meant for PDP leaders in the South-East to mobilize support for the re-election of Goodluck Jonathan as President in the 2015 election.

Making his declaration speech, Nwobodo urged members of the APC in Enugu State not to be deterred by the electoral losses they have suffered in the State in the past.

He said: “You must always lose, what matters is the ability to rise again.

“I must condemn our former party, PDP. I know we had problems. I told our former chairman, how come did we allow five Governors to leave the party?“I am not looking for a job. I am talking because I want peace.

” I want our people to be part of the Federal Government at the centre. I had a problem being an opposition Governor.

“I am not coming into APC because I want anything. I want our people to reintegrate and have our own share of the Federal Government resources.”