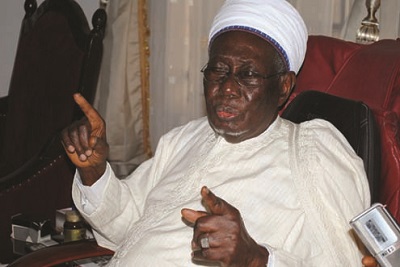 LAGOS, NIGERIA (AFRICAN EXAMINER) – The Muslim Rights Concern (MURIC) has condoled the current Sultan of Sokoto and President-General of the Nigerian Supreme Council for Islamic Affairs (NSCIA), Alhaji Muhammadu Sa‘ad Abubakar III, the Governor of Sokoto State, Alhaji Aminu Tambuwal and the people of Sokoto State over the passage of the 18th Sultan, Alhaji Ibrahim Dasuki.

Former Sultan Dasuki died Monday night at the age of 93 after a protracted illness.

Despite admitting that Islam has a ‘’fatalistic philosophy’’ of death, MURIC said it was devastated by the demise of ex-Sultan Dasuki because of the circumstances in which he died, recalling that he was deposed by the a former state Military Governor, Col. Yakubu Muazu, in 1996 and never regained the throne until his death.

The group in a statement issued in Lagos Tuesday by its Director, Prof. Ishaq Akintola regretted as a former Sultan of Sokoto, the President-General of the NSCIA which is the umbrella organization of all Islamic organizations in Nigeria, it was most unfortunate that a state Governor would possess the power to remove the head of all Nigerian Muslims.

Such situation the association declared ‘’is sad, preposterous and unacceptable’’.

‘’We are therefore determined to ensure that no Sultan will taste such bitter cup of disgrace in future. It was monumental embarrassment and unmitigated disaster for Nigerian Muslims. Of course we know that the deposition of ex-Sultan Dasuki was politically motivated. The state Governor simply obeyed orders from Sani Abacha, the late military dictator and former head of state.

‘’ Article 7 (a) of the 1973 NSCIA Constitution confers the headship of the organization on the Sultan of Sokoto but, paradoxically, Section 6 CAP 21 of the Sokoto State Laws empowers the governor to dethrone the Sultan at will. But it must never happen again. It is quite obvious that the NSCIA Constitution and the Sokoto State Laws are at cross purposes.

‘’Section 6 CAP 21 says inter alia: “The Governor after due enquiry and consultation with the persons concerned in the selection, may depose any chief or any head chief whether appointed before or after the commencement of this law …in the interest of peace or order or good government”

‘’Thus, technically, Nigerian Muslims can be subjected to serious embarrassment and constitutional confusion whenever the governor of Sokoto State chooses to invoke this obnoxious section. Their national leader can be removed by the governor just by snapping his finger’’ the group snapped.

The group described the constitutional provision as impunity, draconian, ridiculous and pernicious, demanding that the ‘’Sultan must be exempted unless the people of Sokoto State want to provoke Nigerian Muslims to call for a radical amendment of the NSCIA constitution’’.

Consequently, MURIC called on the Speaker, Sokoto State House of Assembly to set the necessary machinery in motion to amend the obnoxious section of the law.

It also observed that the insertion of the phrase ‘except the Sultan of Sokoto’ after the words ‘or any head chief’, was so simple.

‘’We call on Nigerian Muslims to be alert and politically conscious. Freedom cannot be enjoyed by the naïve and the myopic in society. Eternal vigilance is the price of freedom. Can any Nigerian President remove the head of all Nigerian Christians? Can Buhari remove the President of the Christian Association of Nigeria (CAN)? Then why should we allow such anomaly in Islamdom? Sokoto must seize the initiative before it is taken from its hands’’ MURIC insisted.

Meanwhile, the organization has appealed to President Muhammadu Buhari to immediately release Col. Sambo Dasuki, the son of the late ex-Sultan who is still in custody for his role in the $2.1 billion arms scandal, so that he could attend his father’s burial rites.

According to the Secretary, Sultanate Council of Sokoto, Alhaji Umar Faruk, the former Sultan would be buried at the Hubbaren Shehu, Sokoto after the afternoon prayer (Zuhr) Tuesday (today).