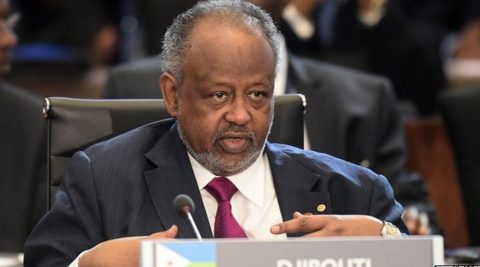 Shengzu, who noted that this year marks the 40th anniversary of the diplomatic relations between the two countries, stressed that China and Djibouti have been enjoying closer cooperation over the past four decades.

“No matter how the international situation changes, the relationship between China and Djibouti has been developing steadily during the past four decades period,

“The two countries have become good friends, good partners and good brothers who trust each other in win-win cooperation,’’ he said.

He also affirmed China’s willingness to strengthen cooperation with Djibouti under the China proposed Belt and Road Initiative and promote the building of a community with a shared future among the two countries.

Hailing the time tested friendship between the two countries, Guelleh on his part, expressed his country’s satisfaction concerning the smooth development of China-Djibouti relations over the past 40 years.

Guelleh also reiterated that his country will continue to work hard to promote the continuous development of bilateral relations with China.

Shengzu, as part of his visit, also held talks with the Djiboutian Prime Minister, Abdoulkader Kamil Mohamed, as well as the Speaker of Djibouti’s National Assembly, Mohamed Ali Houmed.