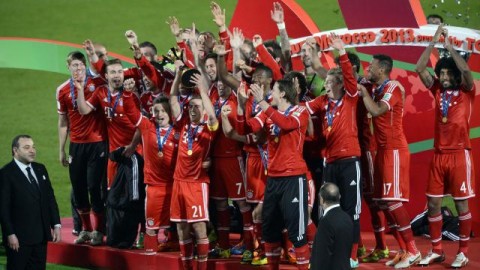 Bayern Munich capped a memorable 2013 by lifting the Club World Cup after a routine victory over Moroccan champions Raja Casablanca in Marrakech.

The German side added the trophy to the Champions League,Bundesliga, German Cup and Uefa Super Cup titles won in a silverware-laden year. 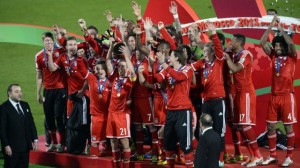 Raja hoped to become the first African side to win the tournament, but were brushed aside by Pep Guardiola’s team.

Dante and Thiago Alcantara both scored before half-time to seal Bayern’s win.

Bayern were overwhelming favourites to beat a Raja side who had exceeded all expectations to reach the final on home territory.

The Moroccan club, who were backed by a partisan crowd inside the Marrakach Stadium, were considered the weakest team in the tournament but dispelled that by recording wins against Auckland City, Monterrey and Ronaldinho’s Atletico Mineiro.

In contrast, Guardiola’s team only had to beat Asian champions Guangzhou Evergrande to book their place in the showpiece, with the European representatives afforded entry at the semi-final stage of the competition.

Bayern swept aside the Chinese side in a comfortable 3-0 win and the signs looked ominous for Raja as the Bundesliga leaders raced into a two-goal lead with less than a quarter of the game gone.