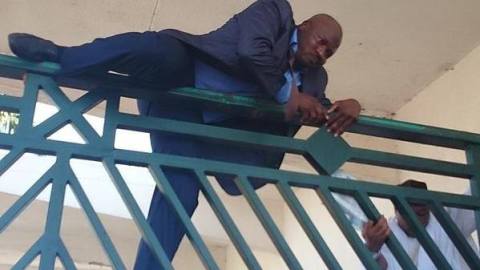 It was a combination of drama and chaotic scene at the National Assembly Thursday as the Police and other security agencies occupied the entire assembly and prevented the President of the senate David Mark, Speaker Aminu Tambuwal and other lawmakers from gaining entrance. 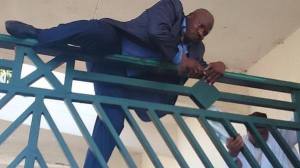 Also the entrance of the national Assembly was blocked by the armed policemen while preventing staff. Lawmakers, journalists and visitors from entering the assembly with their cars.

When the lawmakers eventually gained entrance, some through scaling of the fence, they met another brickwall at the entrance to the lobby where police acting on superior order stopped Tambuwal and about 40 members following him.

It was the State Security Service (SSS) men who forced the door open for Tambuwal to gain entrance but not without a dose of tear-gas and physical assault on some lawmakers.

It was learnt that the Police mission was to arrest the embattled speaker but they were over powered by the other lawmakers and aides.

When the mission failed, they resulted at throwing tear gas inside the lobby of the National Assembly an act described as barbaric by the aggrieved lawmakers.

Following the unfortunate incident Mark being the Chair of the National Assembly ordered that both chambers be shutdown because of what he called unfortunate taken over of the Assembly by armed policemen.

Mark said legislative activities will commence next week Tuesday in both the senate and the House of Representatives.

The senate president also summoned the Inspector General of Police Sulaiman Abba to appear before the senate in plenary on Tuesday to explain why the police invaded the parliament.