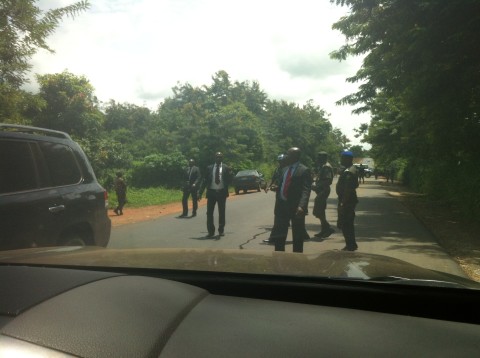 Less than 48 hours to Ekiti Gubernatorial election, the Nigerian soldiers located between Akure and Ado-Ekiti, the Ondo and Ekiti States capital respectively, have done the unexpected as All Progressives Congress (APC) Governors including Rotimi Amaechi of Rivers State, were either prevented from taking off from their domains or gaining accesses to Ado-Ekiti to attend the grand rally of their Ekiti state counterpart, Governor Kayode Fayemi who is also the party’s candidate for Saturday election.

African Examiner gathered that soldiers prevented a chopper that was scheduled to convey Governor Adams Oshiomhole of Edo State from taking off from Benin airport. Similarly, an aircraft which conveyed Governor Rabiu Kwankwaso from Kano was denied landing in the Akure airport. 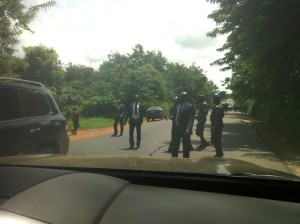 The soldiers at different points reportedly told the governors that they have no clearance to allow them to partake in the serial rallies for Governor Fayemi, adding that the President’s approval must be received before they could be allowed to take off or gain entrance to the town.

In Amaechi’s case, heated argument ensued between him and the soldiers, insisting that, like every Nigerian, he (Amaechi) should be free to move freely within his country.

Consequently, the soldiers cordoned off the road and made him to wait for over 30 minutes while others were allowed to move. In the end, Amaechi turned back, but noticed that the soldiers in a van followed his convoy. When he got to Odudu in Ondo State, he asked his convoy to stop and then asked the soldiers why he was being pursued. This invited the soldiers’ anger as they threatened to shoot if he stopped moving after which they surrounded his convoy and threatened to kill him and his aides if they “refused to move back to Rivers State.”

In Benin, a group of soldiers similarly told Governor Oshiomhole that his chopper was not allowed to fly due to orders from above. After a few exchanges with the soldiers, the governor concurred and returned to his office.

In a related development, Governor Muritala Nyako of Adamawa state was barred yesterday, allegedly by order from the Presidency from flying out of the Yola airport to attend the inauguration of the APC new national executive council in Abuja. In the end, Governor resorted to traveling by road, a move that informed the state House of Assembly moving impeachment motion against him. Earlier today, the Economic and Financial Crimes Commission (EFCC) reportedly froze the state accounts.

Meanwhile, Governor Fayemi grand rally is still ongoing in Ado-Ekiti with the party national leaders such as the new national Chairman, Chief John Odigie-Oyegun and Asiwaju Bola Ahmed Tinubu  and others chieftains in attendance.

The Rivers State Government is concerned about the safety of Governor Amaechi who is right now being held hostage commando style by soldiers and federal government security agents in Olorunsgoilado, Ondo state.

Governor Amaechi as Chairman of the Nigeria Governors’ forum and as an APC governor and chieftain had left Port Harcourt this morning for Ekiti state where he was to join his brother governor in his last mega rally before the elections.

Governor Amaechi was ambushed and refused entry into Ekiti by military personnel acting on orders from above. He made to turn back and return to Akure where his chattered aircraft was parked but was chased and rounded by armed soldiers and security personnel in Olorunsgoilado, Ondo state. According to the captain who led the operation, he had orders not to allow the governor entry or exit.

In the meantime, the chattered aircraft that conveyed he governor has been grounded while the minsters of Defence, police Affairs and Minister of state for Defence have landed the Akure airport.

The Rivers State government is especially worried that Federal government and President Jonathan have singled out Governor Amaechi for harassment and attack.

The Rivers state government is all the more worried as the Ondo saga is coming on the heels of a plot by six PDP lawmakers this morning to carry out a kangaroo impeachment of the duly elected governor of Rivers State, Rt. Hon Chibuike Rotimi Amaechi, con first at Krisdara hotels and later Bauchi street, Port Harcourt.

Ordinarily such banality should be ignored as it neither is legal nor constitutional. However in the light of the recent attempts to hoist a Chief Judge on Rivers people through the back door and the attendant rumours that the reason for that desperate act was to make it easier for the PDP to actualize its sinister daydream of ousting Governor Amaechi before May 29, 2015, we believe that it has become necessary to draw the attention of Rivers people, Nigerians and the international community to the situation in Rivers State.

Only yesterday, in preparation for this tragicomedy, the Rivers State chapter of the Peoples Democratic Party (PDP) accused Governor Amaechi of importing terrorists into the state and the region. They continued their diatribe by demanding that the governor of Rivers State be put under surveillance. The State Government wouldn’t have dignified the PDP’s display of ignorance with a response but for the fact that these accusations coupled with today’s actions are ominous signs of how far the PDP is willing to go in its quest to cling onto power by all means.

The antecedents of impunity on the part of the leadership of the PDP are instructive and the party’s desperation to harm and stop anyone they perceive as major threat to their crumbling electoral fortunes next year is no longer news. The detention attempt and incident at the Kano International Airport last week are still fresh in the minds of Nigerians. Also, the call to put Gov Amaechi under surveillance (or is it house arrest?) on the same day that PDP started effort to unseat the Governor of Adamawa State, His Excellency, Murtala Nyako, is enough indication of the script already written by a jittery PDP

It is sad that the insane minds of the authors of the PDP accusation are jeopardizing police investigations of the 486 travellers who were intercepted in Aba, Abia State, and who are still being screened. One only wishes that the PDP would address the issues of the insecurity in the country with as much fervor and vigour as it deploys towards witch hunting its political opponents

The Rivers Government wishes to state that the world knows those who feather the nest of cultists and militants and for whom they are canon fodder. Governor Amaechi’s position on cultisim, violence and insecurity are clear as is his commitment to fighting poverty and improving the lives of our present and future generations.

The Rivers State Government will not be deterred in its efforts to deliver good governance and democratic dividends to our people.

We appeal to all Rivers people appeals to all members of the All Progressives Congress (APC) and citizens in the state to remain calm in the face of these provocations.

We call on the Security Agencies to exhibit professionalism in their conduct of affairs. We appeal to all well meaning people in Nigeria and around the world to please call the PDP to order before they truncate our democracy.

It appears to us that the PDP clearly have no interest in the peace and stability of either Rivers state or Nigeria.

We are mindful of these mischievous elements but continue to call for tolerance and eternal vigilance. We are certain that the God who reigns in the affairs of Rivers people will again deliver us from this evil and terror that stalks us at noon day