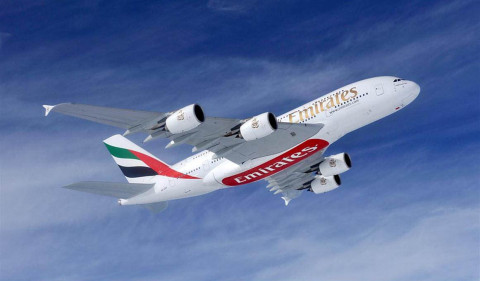 The Emirates Group on Thursday announced its 26th consecutive year of profit and company-wide growth, ending the year in a strong position despite competitive pressure and a global economic environment that is only slowly recovering. 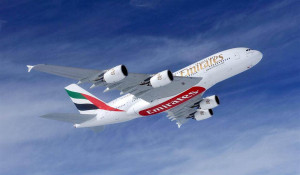 The financial year ending 31 March 2014 also marked an unprecedented level of investment across the Group, continued expansion of its global footprint, and the achievement of new capacity milestones.

In the report, The Chairman and Chief Executive, Emirates Airline and Group, His Highness (H.H.) Sheikh Ahmed bin Saeed Al Maktoum, said achieving 26th consecutive year of profit in a financial year marked by record increases in capacity and significant business investments across the Group, is testimony to the strength of our brands and our business fundamentals.

“Throughout 2013-14 the Group has collectively invested over AED 22.0 billion (US$ 6.0 billion), the highest amount ever in one financial year. We know that to be a sustainable and profitable business we have to keep adding value to our stakeholders, our customers, partners and employees. To do this, we need efficient new aircraft, quality products and services, and cutting-edge facilities. Every dirham invested has been carefully considered against short and long-term goals – be it enhancing our capabilities, improving our product, or expanding our business footprint”, he said.

The Group also continued to invest in and expand on its employee base, increasing its overall staff count by 11% to over 75,000-strong representing over 160 different nationalities, across its more than 80 subsidiaries and companies. Revenue per airline employee increased by 4% to AED 1.9 million (US$ 0.5 million).

“We are moving into the new financial year with confidence, and a strong foundation for continued profitability with our strong balance sheet, solid track record, diverse global portfolio and international talent pool,” said Sheikh Ahmed. “Operating in a dynamic and highly-competitive environment means we have to stay agile, and work even harder to meet and exceed our customers’ expectations. With the help of our 75,000 strong multicultural workforce, we have no doubt that we will be able to capitalise on the opportunities in the year ahead.”

Similar to the last financial year, the Group declared a dividend of AED1 billion (US$ 280 million) to the Investment Corporation of Dubai.

Emirates received 24 new aircraft during the year, including 16 A380s, six Boeing 777-300ERs and two Boeing 777Fs, bringing its total fleet count to 217. The airline remains the world’s largest operator of the Boeing 777 and A380 – both aircraft being amongst the most modern and efficient wide-bodied jets in the sky today.

Emirates revenue for the first time surpassed AED 80 billion, at a new record of AED 82.6 billion (US$ 22.5 billion). While the average price of jet fuel remained high, it was slightly lower compared to last year and has supported Emirates’ bottom line improvement. Emirates’ fuel bill increased by 10% over last year to reach AED 30.7 billion (US$ 8.4 billion). Total operating costs increased by 12%, compared to a revenue increase of 13% over the 2012-13 financial year.

The airline successfully managed increased competitive pressure across all markets to record a profit of AED 3.3 billion (US$ 887 million), an increase of 43% over last year’s results, and a healthy profit margin of 3.9%.

Emirates also improved its premium seat factor despite lingering economic uncertainty and strong competition in many markets. Premium and overall seat factor for the airline’s flagship A380 aircraft outperformed the network, underscoring the popularity of Emirates’ premium and A380 product amongst passengers.

Over 18 million passengers had flown on an Emirates A380 when the airline marked its fifth anniversary of A380 operations in August 2013. In 2013-14, Emirates introduced A380 services to Barcelona, Brisbane, London-Gatwick, Los Angeles, Mauritius and Zurich, bringing to 27 the total number of destinations served by its popular flagship aircraft. Emirates’ Los Angeles service is also the world’s longest A380 flight at 16 hours and 20 minutes.

Highlighting its sound financials and investor confidence, Emirates raised a total of AED 12.0 billion (US$ 3.3 billion) through a variety of financing structures, mainly to secure its ongoing fleet expansion. Further, eight of the aircraft delivered in the financial year were funded through two corporate bonds issued in early 2013 which raised AED 6.4 billion (US$ 1.8 billion) in funding.

Revenue generated from across Emirates’ six regions continues to be well balanced, with no region contributing more than 30% of overall revenues. East Asia and Australasia remained the highest revenue contributing region with AED 23.8 billion (US$ 6.5 billion), up 14% from 2012-13. Gulf and Middle East revenue increased 17% to AED 8.3 billion (US$ 2.3 billion), and Europe revenue increased 16% to AED 23.4 billion (US$ 6.4 billion), reflecting new destinations as well as increased frequency and capacity to these regions.

Focusing on customer touch points, Emirates opened a new dedicated airport lounge in Rome, and upgraded its lounges in Paris Charles De Gaulle, London Gatwick and Bangkok. Emirates also announced plans for a new 300-seat contact centre in Budapest to support future growth and supplement its language and response capability, and continued to invest in its onboard product including the installation of Wi-Fi and “live” TV.

In its first full year of operations, the newly commissioned Concourse A at Dubai airport for Emirates’ growing A380 fleet witnessed a significant passenger throughput with 37% or 8.2 million Emirates passengers departing Dubai enjoying the new state-of-the art facilities, spacious lounge areas to board 27,000 flights.

Defying the industry trend, the 2013-14 financial year has been a strong one for Emirates SkyCargo who for the first time reported a revenue over US$ 3 billion to reach AED 11.3 billion (US$ 3.1 billion) mark, a 9% increase over last year.

Contributing 15% of the airline’s total transport revenue Emirates SkyCargo continues to play an integral role in the company’s expanding operations.

Emirates SkyCargo’s tonnage strongly increased by 8% to reach a remarkable 2.3 million tonnes in a flat and challenging airfreight market, highlighting its ability to grow revenues against the industry norm. This year, freight yield per Freight Tonne Kilometre (FTKM) decreased by 1%.

At the end of the financial year, the Emirates SkyCargo freighter fleet had grown to 12 aircraft – ten on operating lease and two on wet lease.

Emirates’ Destination and Leisure Management including hotels recorded revenue of AED 623 million (US$ 170 million) an impressive increase of 35% over last year. This positive development was supported by the first full year of operation of the JW Marriott Marquis Hotel in Dubai, the world’s tallest hotel. The second tower of the hotel will be fully operational later this year.

In its 55 years of operation, 2013-14 has been dnata’s most successful yet, building on its very strong results in the previous year. dnata grew its revenue to AED 7.6 billion (US$ 2.1 billion).