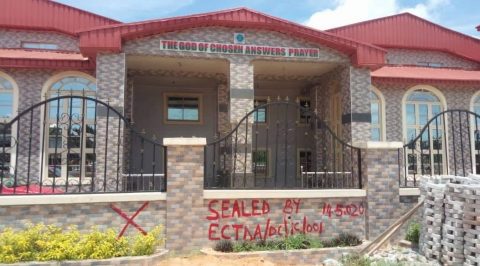 According to the Enugu capital territory Development Authority (ECTDA,) which carried out the sealing exercise, the structure built on waterway have been ravaged by flood, and poses serious danger to human life, adding that government took the decision to forestall likely casualty from the imminent collapse of the building.

Speaking on the development,  Executive Chairman of (ECTDA) Mr. Josef Umunnakwe Onoh, explained that government took the action  to save lives and property, avert recurrence of building collapse in the state and ensure that appropriate measures are taken immediately to remedy the dangerous situation in the church.

Onoh, also  disclosed that his agency has directed the leadership of the church to immediately liaise with the state chapter of the Nigerian Society of Engineers (NSE) to reassess the level of damage done by the flood and recommend appropriate engineering measures to be applied to fortify the church for public safety and reclaim the wrecked structures in the church’s premises.

He said there has been a public outcry, especially from residents living at the bank of Ekulu River, G.R.A, adjacent to The Lord’s Chosen Church, over the imminent danger posed by the worship centre, which was built on the waterway, on their property.

Onoh, claimed that  ECTDA had served “Stop-work” and “Remove” notices on the ongoing construction work at the premises of the church, which were ignored completely until the recent havoc that wrecked the foundation of the church building to the point of imminent collapse.

African Examiner recalls that only recently, a three-storey building under construction at Ezeluike Street, Olympic Layout, off One Day, Agbani Road, Awkunanaw, Enugu South Local Government Area of Enugu State, which was marked “Stop-work” by ECTDA collapsed after the contractor neglected government’s order and continued work on the property.

The ECTDA Executive Chairman, announced that “a technical team from ECTDA and the Nigerian Society of Engineers, Enugu State branch, will commence immediate evaluation of the structural integrity and stability of all buildings within the State Capital Territory”.

He expressed concern over the spate of construction works on the waterway and without building approvals and their imminent dangers, and appealed to residents to always adhere strictly to rules and regulations guiding structural development in the state, in order to save lives and avert damage to property.”