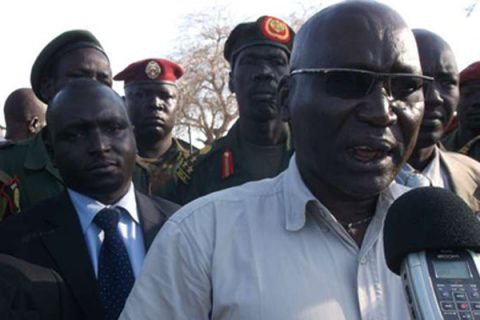 Former army Chief of Staff General Paul Malong, Deputy Chief of Defense and Inspector General Malek Reuben Riak and Information Minister Michael Makuei Leuth will now be subject to sanctions by all EU member states, effective immediately. The sanctions include assets freezes and a ban on travel to EU countries.

Britain’s minister for Africa, Harriett Baldwin, welcomed the sanctions and pledged her country’s support to ending violence in South Sudan.

“It is more vital than ever that those undermining the peace process recognize the price of their actions,” she said. “The UK has played a leading role in pushing for these sanctions at an EU level and it is right that we are taking tough action against those who continue to act against the interests of the South Sudanese people.”

Speaking to VOA’s South Sudan in Focus in December about the sanctions, Makuei said he was not frightened by the actions of the Trump administration.

The EU sanctions come ahead of a second round of talks on revitalizing a collapsed 2015 peace agreement between South Sudan’s government and rebel forces. The initiative, known as the High Level Revitalization Forum, will begin on Monday in Addis Ababa, Ethiopia.

“We remain committed to supporting the peace process and urge South Sudan’s leaders to participate in good faith to agree [to] a political solution and end the suffering of their people,” Baldwin said.

The conflict has devastated the country, causing a humanitarian, political and economic crisis. More than 1.5 million people are on the brink of famine — twice as many as the same time last year. More than 4 million people, comprising a third of South Sudan’s population, have fled their homes, causing Africa’s largest refugee crisis./VOA