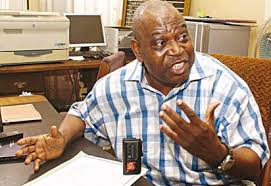 The group disclosed this in a press statement signed by its secretary, Comrade Abiodun Aremu, affirmed that the murder of Comrade Iyayi was connected with the on-going ASUU strike to compel the Federal Government to, not only honour the collective agreements it reached with it in 2009; but equally to make government responsible to adequately fund public education against the dictates of its puppeteers – the IMF and World Bank.

The statement mentioned, “We strongly believe that the assassination of Comrade Iyayi was carried out by expert shooters in the cover of the Nigerian Intelligence, reminiscence of the State murder of Dele Giwa in 1986 and Kudirat Abiola in 1996.

“The ‘official explanation’ so far floated by the Federal Road Safety Corps (FRSC) and the Sole Administrator of the Specialist Hospital Lokoja – Dr. Paul Amodu that Comrade Iyayi’s death was as a result of the accident, does not explain away “The Strange Object That Pierced Iyayi’s Heart”.

The statement also reiterated that the assassination of Comrade Iyayi was actually a state act aimed at destabilizing ASUU in the wake of a major national struggle. Adding that Comrade Iyayi was actually found-fixed-finished because of his prominent role in exposing the Government’s IMF and World Bank destructive policies in Education and the Nigerian economy, thereby putting a lie to the false claims that Nigeria is broke, as cover to loot public wealth for private selfish interests.

“Nigerians must know that a former ASUU President, Comrade Dr. Mahmud Tukur, was murdered in a similar painted-accident scenario on the Kaduna-Zaria road in 1982 following ASUU’s dispute with the Shagari’s National Party of Nigeria (NPN) Government in 1980/81 on the same issue of funding, university autonomy and academic freedom, as it is today with the Jonathan Presidency.

“As we in JAF commiserate with Iyayi’s family, ASUU, comrades and friends of Comrade Iyayi and the oppressed poor in Nigeria and Africa whose Iyayi’s struggles touched; we urge the Nigeria Labour Congress (NLC), Trade Union Congress (TUC), Nigeria Medical Association (NMA), the Nigerian Bar Association (NBA) and ASUU to join forces with JAF to unravel the FACT behind the State murder of Iyayi by challenging the Presidency, Minister of Defence and the Inspector General of Police to tell the public the strange object which pierced Iyayi’s heart and why Festus Iyayi should be murdered?”

The Joint Action Front (JAF) however said that Comrade Festus Iyayi’s death is a wakeup call to all Nigerians to struggle for system change. “As far as we in JAF are concerned, Nigerians should no longer tolerate this unjust polity where: a very tiny group of Nigerians who loot the treasury use their stolen wealth to sustain themselves in power; use their power to get richer and richer when the poor get poorer and poorer and use the unjust system to bring out the army and the police to kill the poor people and comrades whenever we protest against oppression and exploitation.